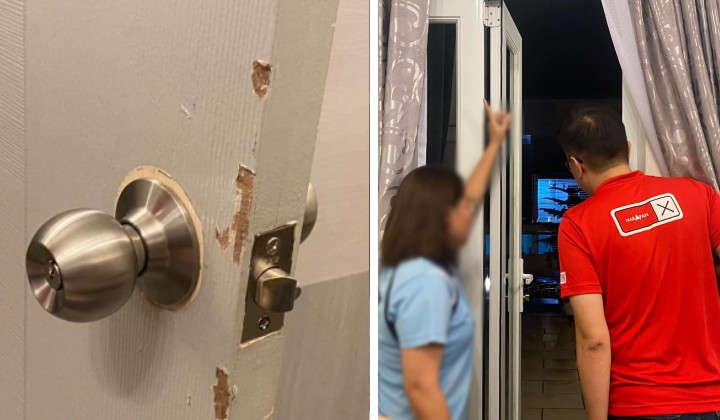 A woman had the fright of her life when a robber broke into her house in Kota Kinabalu.

The robber had taken off his shirt and came across the woman at the staircase.

Startled, the woman ran into her room and locked the door, which the robber tried to break down.

Fortunately, the victim ran out of the balcony outside the room in time to scream for help, which forced the robber to make good his escape.

The burglary occurred at 3 am in a three-story home in an upper-class residential area in Penampang.

The victim heard a voice downstairs and ran into the criminal in the stairwell when she decided to check.

The victim immediately ran into her room and locked it while the gangster tried to pry open the door aggressively.

She then ran to the balcony outside the room and shouted for help before the gangster left.

After receiving a report from the victim’s cousin last night, Luyang state assemblyman Phoong Jin Zhe went to the victim’s house to find out the ins and outs.

In an interview with Sin Chew, he said the female victim believed that the culprit had tried to break in on 10 November but was discovered by her family and escaped.

Unexpectedly, the robber tried again in the ungodly hours the next day.

This time breaking into the house after destroying the main window of the house.

While the woman was hiding in her room, the mother was awakened, and she also shouted for help.

After the female victim cried out for help, the gangster fled and left his clothes on the ground, which showed that the gangster had already taken off his shirt.

He said that the victim had already reported to the police and would actively follow up with the police on this matter.

Neighbours Looking Out For One Another Can Lessen Crime

Phoong also hoped that the matter would attract public attention and remind everyone to be careful.

The DAP lawmaker added that neighbours help and take care of each other.

As the saying goes, distant relatives are not as good as close neighbours.

Luyang state assemblyman Phoong Jin Zhe on the need for neighbours to keep a look out for each other.

At the same time, he said public security has been deteriorating and getting worse.

He said public security and safety issues should be the primary task and duty of the government.