Six suspects, including two Malaysians, were arrested in Cambodia for kidnapping and extorting a Malaysian woman. 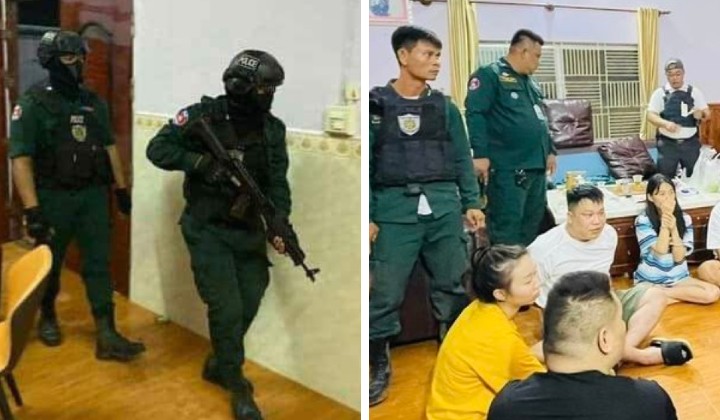 The police in the Koh Kong province of Cambodia busted a kidnapping and extortion case on Friday (11 November).

They rescued a Malaysian woman who was kidnapped half a month ago and arrested 6 Malaysian and Chinese suspects.

Koh Kong is the southwestern province of Cambodia and one of the biggest provinces in the country, with a long undeveloped coastline.

According to Sin Chew, the police raided a house in the city centre at 9 pm.

The Chinese press cited Cambodian China Times, which reported that the police in Koh Kong province received a report on Saturday from a 39-year-old Malaysian.

The man named Wang called the police to say his wife was kidnapped on 31 October.

After receiving the report, the police quickly launched an investigation and obtained reliable information in less than two weeks.

On the evening of 11 November, the police officers went to the criminal’s hiding place and arrested 6 suspects, including 2 women.

The suspects are aged between 20 to 30 years old, with 4 from China and 2 from Malaysia.

They are currently detained at the police station pending further investigation.

Recently, Cambodia has been a hotbed of crimes involving Malaysians.

Many were victims of human trafficking and slave labour, being forced to work for scam syndicates targeting victims in mostly Chinese-speaking countries.

The Malaysian embassies in Cambodia, Laos, Thailand and Myanmar are working with authorities to rescue victims of a job scam that lured them abroad. #Crime #Geopolitics #Cambodia #Malaysia #ThePhnomPenhPosthttps://t.co/oUqsqPrYQB pic.twitter.com/Z5C2hFrYE7

Besides Cambodia, Malaysia has also been rescuing its citizens from massive job scam syndicates in Myanmar and Laos.

The reason is that they have been slapped with fines they cannot pay for immigration offences.

Saifuddin also claimed that some have refused to return home despite the government’s efforts to rescue them, although no reason was given.