Nutrimalt is produced by multinational brewer Carlsberg which is famous for its beers. 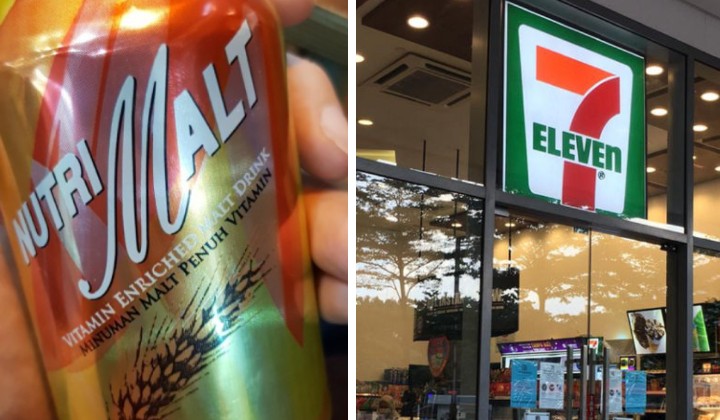 7-Eleven Malaysia has issued a statement to assure the public that the Nutrimalt drink is free from alcohol.

The statement was made in response to a customer’s concern regarding Nutrimalt.

Danish multinational Carlsberg Group produces the malt beverage and it can be found at various shops, including 7-Eleven.

The customer recently made a video, highlighting 7-Eleven specifically, to tell fellow Muslims ‘not to be duped’ by the product as it is produced by a manufacturer of alcoholic beverages.

This, however is not a ‘revelation’, as the manufacturer’s name is clearly printed on the cans and the product has no halal logo from Jakim.

After the video went viral, 7-Eleven said it sought clarification from the drink’s manufacturer and they confirmed that Nutrimalt does not contain alcohol.

The manufacturer gave us an official response of reconfirmation that the product is non-alcoholic.

7-Eleven on the reply they received from Nutrimalt’s manufacturer.

7-Eleven said they would always pay attention to concerns raised by customers and were committed to ensure they heard and addressed any concerns.

To Drink Or Not To Drink?

In the viral video, the ‘concerned customer’ who is a preacher known as Ustaz Syah was seen in a convenience store when he started telling people not to buy Nutrimalt-branded drinks from 7-Eleven as they were not halal.

As mentioned earlier, Nutrimalt has no halal certificate from Jakim and is not stacked in the alcoholic section because it is non-alcoholic.

The Halal Hub Division of the Islamic Development Department (Jakim) through a Facebook post clarified that Nutrimalt does not have a halal certificate and is not eligible to apply for the Malaysian Halal Certification Certificate.

Citing the Malaysian Halal Certification Procedure Manual (Domestic) 2022 clause 6 (2), it states: “Companies that produce and/or distribute halal and non-halal products, including food delivery services are not eligible to apply for Malaysian halal certification.”

Users can check the halal status of food products or premises along with full guidance on Malaysia’s Official Halal Portal, the SmartHalal application and the Verify Halal application.

Those with questions or require clarification pertaining to halal issues can visit the Facebook page of the Jakim Halal Hub Division.

At the same time, it should be noted that the matter concerning the halal status of malt beverages is nothing new in Malaysia.

Netizens had previously raised similar concerns on social media, citing announcements made by the authorities, including the office of the Federal Territory mufti.

As far back as 1987, the 19th Fatwa Committee Muzakarah said it is not justified to declare a malt drink halal, even though (the content) of the drink is halal, because it is feared that it would confuse the public.

On the other hand, in 2011, the National Fatwa Council ruled that Muslims can consume malt soft drinks such as Barbican.