The couple works two jobs to repay the loans. 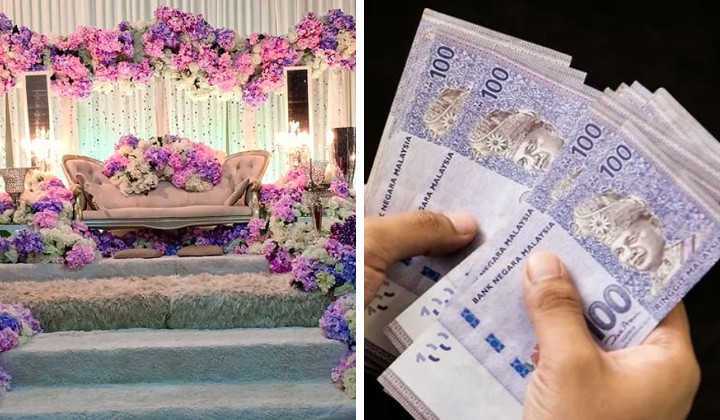 Should you take a personal loan to finance your wedding?

Logically, it doesn’t make sense for the bride and groom to spend beyond their means.

But that did not stop a woman from taking a personal loan worth RM40,000 for a lavish wedding.

She shared on social media that it was not her decision.

It was her parents who insisted on a grand wedding ceremony.

Her sharing on the Twitter social site @ConfessTweetMY resonated with netizens.

Hi, admin, I want to share a story. Please don’t reveal my profile. I have only been married for six months. During these six months, I cried more than I was happy. It all started before the wedding when my parents forced me to take out a loan for the wedding.

The woman expressing her regrets on taking a personal loan to finance her wedding.

Her husband is a clerk, and she is a government contract worker.

She had told the parents that she wanted to have a small party, inviting up to 100 people.

Her parents disagreed because many of their relatives and friends had to be invited.

When she resisted the idea, her parents cast doubts about her husband’s ability to care for her after marriage.

My husband (at that time as a fiance) was disheartened when he found out. He sat down and discussed with my parents on how many people would be invited. After counting, the number was 1,000 people and they wanted it to be held in a hotel. My parents suggested that my husband take out a personal loan of RM40,000 if he wants to get married.

The woman on how money became a condition for them to get married.

Too Late For Regrets

In the end, her husband took out a loan, and the ceremony was held.

Her parents are happy that many friends came and praised the ‘grand’ ceremony.

The woman also said they are both stuck with heavy debt in personal loans.

Right now we are struggling to pay the loan. Husband returns to work and continues to do food delivery service. I also sell as a ‘dropshipper’ online but the sales are poor, sometimes there are none.

The woman revealing the financial consequences of their ‘borrowed’ wedding.

She added that her husband used to be cheerful but no longer so because of the fatigue of working and the constant burden of repayment.

Most sympathize with the plight of the couple who seem to be victims of circumstances.

Some said if it’s a Chinese wedding, the guests will give red envelopes (ang pow) to cover the cost of the marriage.

Traditionally, the standard amount of money to put in a red envelope is at least equal to the cost of the meal at a Chinese wedding banquet.

Sometimes, couples even profit if they receive a large amount.

The Concept Of Moderation In Islam

Meanwhile, some regret that the mentality of the Malays still holds that the male side is responsible for the cost of weddings.

Islamic matchmaker Zuhri Yuhyi said the hadith (sayings and teachings of Prophet Muhammad pbuh) tells Muslims that the ‘walima’ (the marriage banquet) should be held in moderation without overdoing it.

He said couples should never start their married life in debt, as they already have other financial responsibilities.

A wedding can certainly do without extensive planning, frills and fuss. The marriage, which produces the most blessings, is that which involves least burden.

Islamic dating councillor Zuhri Yuhyi to TRP on spending according to one’s means.

Zuhri said the couple’s predicament is all too common.

He said some families would splurge on a wedding, so they don’t ‘lose face’ in the community.

It is becoming a trend among the Malay community nowadays where the amount of dowry is based on the bride’s academic level.

This has been said to be why Malay men are marrying late these days.

Do you agree with this culture?