Captain Fedzrol says rainy weather forced him to divert to another area but wind pushed the helicopter higher. 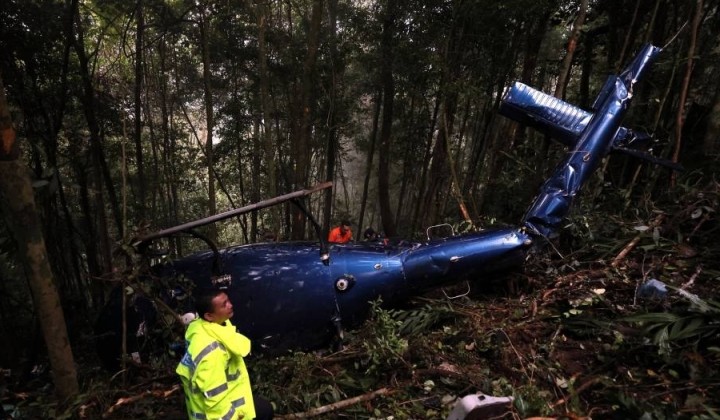 The pilot of the helicopter that crashed in Brinchang, Cameron Highlands, stated that he used all of his expertise to protect the safety of his passengers during the emergency landing.

According to Bernama, Captain Fedzrol Norazam, 43, stated that he attempted to locate a secure landing site when a sudden gust of wind around midday made it challenging to control the helicopter until it approached the mountainous areas.

We used the regular route on the return journey from Gua Musang, however, rainy weather near Kampung Raja (Cameron Highlands) forced me to divert to an area before Brinchang, where it was not raining and has another helicopter route.

When I passed this area, a strange thing happened…the wind pushed the helicopter higher and I felt something was wrong. I tried to control it (helicopter) as best I could but I did not tell the passengers so as not to cause panic.

He added that he tried to turn around but the wind continued to push the helicopter higher and when they were at an altitude of 5,000 feet, it was difficult to go down and unstable even after using the full engine throttle.

After receiving a visit from Health Minister Khairy Jamaluddin at the Raja Permaisuri Bainun Hospital (HRPB) yesterday, he described the frightening moments to the media.

When Did This Incident Occur?

All Passengers Were Found Safe

Fedzrol says that he then changed his plan and used a technique that uses the pitch attitude of a helicopter to make sure that the impact starts at the back of the helicopter, protecting the people inside.

After crashing, I was unconscious for a few minutes. As soon as I woke up, I heard voices calling me and found that all the passengers had managed to get out to safety while I was still in the seat with my seat belt on and my hand still holding the controls

Fedzrol sustained a head injury. While he was grateful that everyone made it out alive, he apologised for the tragedy.

He stated that the experience did not dampen his love for flying.