The shorter supply is because egg producers scaled down output because of rising costs. 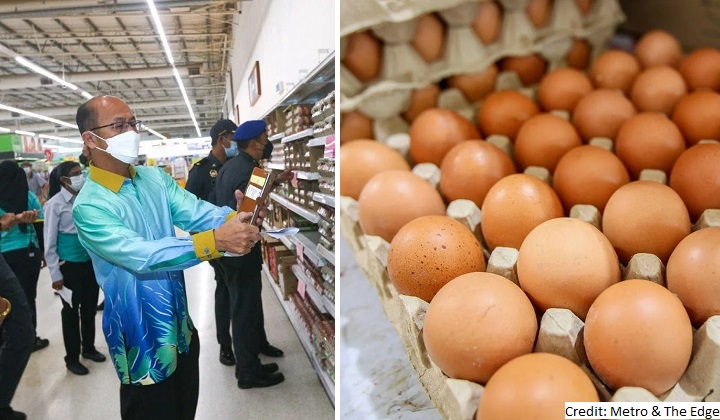 You know times are tough when you can’t afford to buy eggs anymore.

The government has rejected the recommendation that the price of chicken eggs be floated.

There will also be no import of chicken eggs despite the current lack of domestic supply.

The comment was made by the Special Task Force on Jihad Against Inflation chairman, Tan Sri Annuar Musa.

He acknowledged a shortage of more than 96 million eggs per month.

The monthly production is only 871.9 million eggs compared to the requirement of 968.8 million eggs.

The drop is attributed to the increase in production costs.

Annuar said importing chicken eggs is not feasible as it is costly.

At the same time, the government said it wants to protect the local production industry.

If the price of eggs is floated, the price is expected to rise by no less than 12 cents, so we do not approve this proposal.

Tan Sri Annuar Musa on why the government will not float the price of eggs.

To deal with the issue, the task force recommends a subsidy increase of two sen per egg from the current eight sen.

The financial implication of such an increase is estimated to be about RM20 million.

Either that, or a two sen increase of the current control price is imposed per egg.

The current price of chicken eggs at the farm level for grade A is 41 sen per egg, grade B 39 sen and grade C 37 sen.

However, Annuar said, the production cost for an A-grade egg at the farm level, for example, is 51 sen.

So if the cost of grade A is 41 cents mixed with eight cents (subsidy), totalling 49 cents, the producer’s income is two cents lower than the production cost.

Some breeders take actions such as eliminating chickens that have reached a certain age early.

Usually, chickens reach the age of 80 to 85 days and can lay eggs again, but have to be disposed of to save costs.

The production of replacement chickens for those slaughtered is relatively slow, causing the overall production to continue to decline, and this will continue to affect the supply of eggs in the country.

As inflation rises, the public has been complaining about soaring food prices.

Raising The Eyebrows Of Consumers

The rising prices for goods continue to worry many people, and many have taken to social media to voice their unhappiness.

The public has also vented their anger and frustration at the government for its lack of practical solutions.

The government announced some measures from time to time, such as reducing chicken prices.

However, the measures are seen as half-hearted and makes no difference in the long run.

Stop Washing Your Eggs Or You’ll Get Salmonella