A woman and a man broke their legs in the incident. 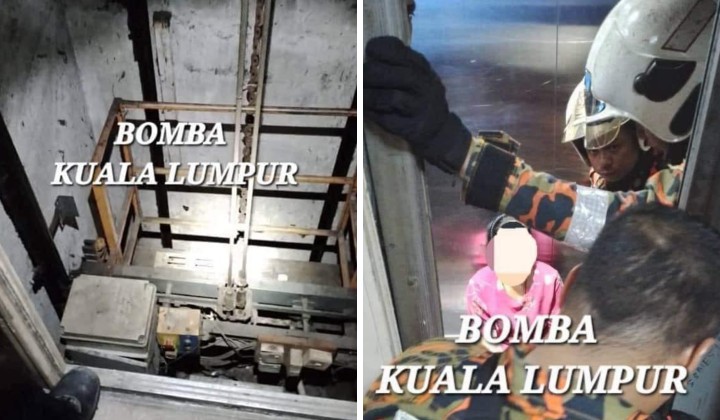 Two individuals broke their legs, while four others were safe when the lift they were on fell from the eighth floor.

The incident happened at a condominium block in Lengkok Thamby Abdullah, Brickfields.

A spokesman for the Operations Center of the Kuala Lumpur Fire and Rescue Department (JBPM) said they received an emergency call regarding the incident at 9.52 pm.

A total of 11 members, together with one machine from the Fire and Rescue Station (BBP) Jalan Hang Tuah, were rushed to the scene of the incident.

The Fire and Rescue Department elaborating on the incident.

Upon arriving at the location at 10.12 last night, the Fire and Rescue Department was informed that there was an elevator that had fallen from the eighth floor.

There were six individuals in the elevator involved at the time of the incident: three women, two men and a two-year-old girl.

A woman and a man broke their legs.

They were sent to Hospital Kuala Lumpur (HKL) to receive treatment.

The operation ended at 11.35 pm, and the cause of the incident is still under investigation.

Residents Left In Worry And Shock

According to residents, the incident was the first since the residential building was first inhabited around the 1970s.

Berita Harian quoted a resident saying the incident was a nightmare for residents and were shocked when they found out about it.

We have never failed to pay the monthly maintenance fee. When there is damage to this elevator system, there may be a failure during the inspection. We hope that the responsible party can carry out a more detailed inspection to avoid a repeat incident.

Condo resident to Berita Harian on the how the incident affected the residents.

He said the lift system had problems, such as getting stuck at certain times, but the fact that the facility fell surprised the condominium residents.

Elevators Are The Safest Form Of Transport

Lifts are considered one of the safest forms of transportation thanks to modern electric safety mechanisms.

It is significantly less risky than taking an escalator or even a flight of stairs.

But what to do if you get stuck in a lift?

It is estimated that about 4% of the population worldwide suffers from lift phobia.

If you have this type of phobia, the sight of those doors closing can trigger an immediate feeling of anxiety and panic.

Can You Survive A Falling Lift?

If the lift starts falling, the best way to survive in a falling elevator is to lie down on your back.

Sitting is terrible but better than standing because buttocks are nature’s safety foam.

Muscle and fat are compressible and help absorb the impact from G forces.

Most likely, a falling elevator won’t be unobstructed.

But if it was, you would encounter weightlessness for a few seconds before being crushed like a bug.

Because what happens to your fragile body in a falling elevator can’t be undone by any “tricks” like jumping at the last second.