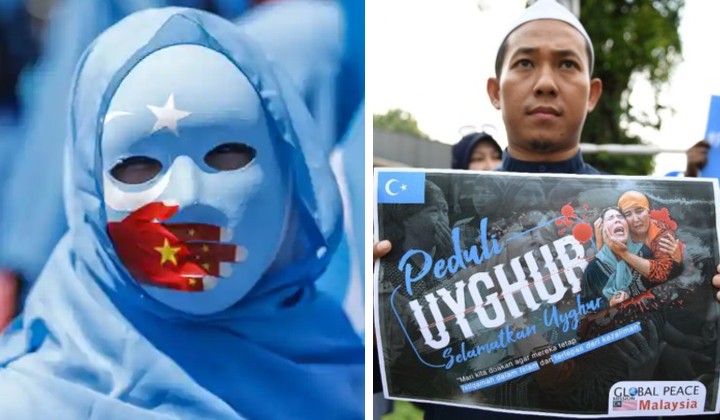 In a disappointing but unsurprising move, Malaysia refused to take a stand at the United Nations Human Rights Council (UNHRC).

Malaysia appeared to have taken the easy way out by abstaining from voting against debating alleged widespread abuses in China’s Xinjiang region.

The United States and its allies proposed the debate after former UN rights chief Michelle Bachelet released her long-delayed Xinjiang report in August this year.

The report cited possible crimes against humanity against Uyghurs and other Muslim minorities in the far-western region.

The 47-member countries in the council voted 19-17 against holding the debate, with Malaysia and 10 other nations abstaining.

Look at the names of the countries on the UN “Human Rights” Council. What a Joke!

Oh, and for the record, every majority Muslim country on the council, including Pakistan, Qatar, Malaysia etc. either voted no or absent on the motion to debate the Uyghur genocide.

Somalia was the only Muslim and African country to vote YES.

Give Your Seat To Someone Who Will Vote

The appointment was on the basis that Malaysia has continuously protected and promoted human rights, both domestically and internationally.

Malaysia’s abstention was a disappointment given its previous stance as a champion of human rights on the world stage, although it is not surprising.

The refusal to make a stand made it look like the country was bending toward China, a sensitive subject, especially after a remark by a Malaysian minister not too long ago.

Malaysia’s abstention was also in stark contrast with the extensive support by Malaysian non-state actors (NSAs) for the Uyghurs.

Economic Explanations Only Go So Far

NGOs, think tanks and human rights activists spoke to TRP about Malaysia’s neutral stance and how it could have been better.

Jamal pointed out that ACCIN is disappointed with Malaysia’s abstention, but at the same time, it understands its delicate position in bilateral relations with China.

China is a giant, our biggest trading partner and a very influential nation. So any decisions that may affect our bilateral relationship will have a serious affect on our economy. This is one risk, our government does not want to take.

ACCIN chief executive officer Jamal Shamsudin on why Malaysia is not confronting China.

Jamal added that ACCIN had also written to the Foreign Ministry led by Datuk Seri Saifuddin Abdullah to make good use of its seat on the UN Human Rights Council.

You Have To Arrive At A Decision

He said the concern about the human rights situation in Xinjiang is legitimate, and no country should be immune from a discussion at the United Nations.

However, it is always difficult for any member state to vote against a permanent member of the Security Council.

In the case of Malaysia, it is even more difficult because of its strong economic ties with China. Malaysia’s abstention’ reflects how Malaysia is extremely careful in trying to reflect a balance in its position.

Dr Razak said Malaysia needs to balance its close economic and diplomatic ties with China and the need to highlight the religious and human rights suppression of Uyghur Muslims in Xinjiang.

Most Important UN Decision On Uyghurs For Decades

She said there had been much expectation given that Malaysia, in the past, had sheltered Uyghur asylum seekers from China.

After years of crying out loud, we lost the opportunity to have the debate, but the fight is not over yet. We wish Malaysia would not side with China. Still, it’s an improvement as we only lost the vote narrowly.

Uyghur activist Rushan Abbas on her disappointment with the result of the vote.

At the time of writing, Rushan is in Malaysia to spread awareness of the plights faced by the Uyghurs, speaking in seminars hosted by the Malaysia Muslim Youth Movement (Abim).

This heart-rending reminder was spoken again today by a Uyghur activist Rushan Abbas at a special talk on Women and Children of Uyghur: The Untold Stories organized by @abimalaysia women’s wing (Helwa ABIM).https://t.co/N6Iuv4J9ra #MeTooUyghur #PeduliUighur

The 55-year-old, who also met with Malaysian MPs in the parliament, is in Malaysia with her husband, Abdulhakim Idris, to promote a documentary titled ‘In Search Of My Sister‘.

The documentary tells of her efforts to find the truth behind her sister’s disappearance in China.

As one of the significant trade partners of China, Malaysia has more advantages and opportunities to mention and put pressure on China than other countries.

He said Malaysia should play it’s as a pro-human rights democratic Muslim state.

"The road to justice is never an easy one," said @OmerKanat1 for @UyghurProject.

Despite this setback, Uyghurs will continue to push governments, the @UN, the business community to support accountability for rights abuses.@jamestareddy @ByChunHanhttps://t.co/an2whBkET9

At the same time, the Malaysian Consultative Council for Islamic Organisations (Mapim) said Malaysia abstaining from voting is outrageous.

They expressed their support for the findings of the High Commissioner’s report and urged the Human Rights Council to hold a special session in response.

Abstaining Is An Act Of Cowardice

Some local politicians also questioned why Malaysia is so tolerant of China’s alleged abuses of its Muslim population.

In 2019, Mujahid, then a Prime Minister’s Department minister, was criticised for his working visit to China.

They used to attack me because I went to Xinjiang on a peace mission, now there is an opportunity to discuss the issue and Malaysia chose to be neutral.

He said Malaysia’s stance is increasingly weak on the issue of the defence of the Muslim minority in the Uyghurs and also in Palestine.

Meanwhile, Abim emphasized that the time has come for Wisma Putra to present a White Paper on Foreign Policy for the long term.

It would enable Malaysia to be more active in seeking peace against world conflicts and human rights violations, especially the world community’s religious rights.

Malaysia should strive to remains a country that respects the sovereignty of other countries, without losing its role in voicing against human rights issues because such issues will also affect Malaysia.

When contacted, a Ministry of Foreign Affairs spokesperson said Wisma Putra is not issuing any statement yet.