The new pricing would last for a month starting 10 September. 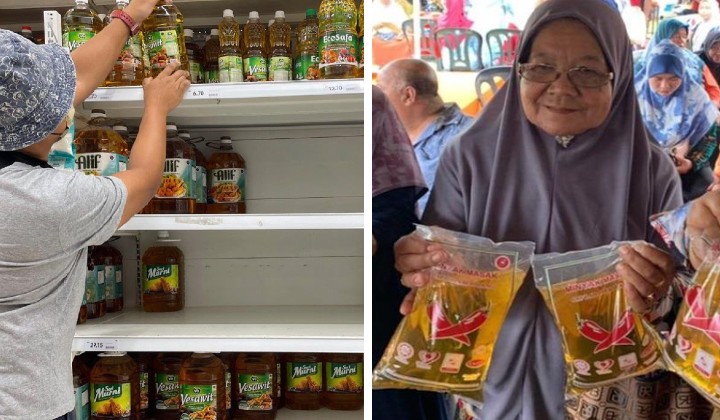 In the run-up to parliamentary elections, it is not uncommon for the government and aspiring politicians to distribute goodwill.

The government would give cash and discounts and reduce the prices of goods, while politicians tend to give away things like groceries and free meals to citizens.

Although electoral gifting is generally shunned, it is also perceived as providing citizens with a way to evaluate candidates and the political parties they represent.

Most recently, the government decided to lower the ceiling price of 5kg bottles of cooking oil by RM2, from RM33.50 to RM31.50 starting this Saturday (10 September).

The Ministry of Domestic Trade and Consumer Affairs stated that the upcoming ceiling prices for 1kg, 2kg and 3kg of cooking oil would be set at RM7.10, RM13.50 and RM19.50.

On 1 July, the government abolished the subsidy for bottled cooking oil and replaced it with price control.

You Help Me, I Help You

If people are sceptical of the government’s sincerity, they can hardly be blamed as the new price is only in effect for a month.

Furthermore, it wasn’t long ago that the government decided to end the subsidy for cooking oil.

We need the gov to control the product price bukan tabur duit. Already 2022, is that the only way gov have, to calm the rakyat??? If minyak masak start mahal, makanan pun akan start jadi mahal. Logik laaaaaa sikitttt https://t.co/YYoCY4c3nw

Incidentally, the general election talks back then were nowhere as loud as currently.

But why should distributing goodies or reducing prices during a parliamentary election season be seen as a potential form of corruption, bribery, or coercion?

Voters in a democratic government system have a fundamental right to judge independently.

It is feared that goodies given by political actors to citizens before elections can cloud their judgement and make free choices impossible.

Some sense of indebtedness or obligation of reciprocity might affect the decision at the ballot box.

Yet, as in patronage politics, fulfilling this mutuality can take on various actionable and practical forms.

In the case of an election season, it is rarely about mere vote-buying.