The drivers are said to be parents waiting to pick up their kids from school. 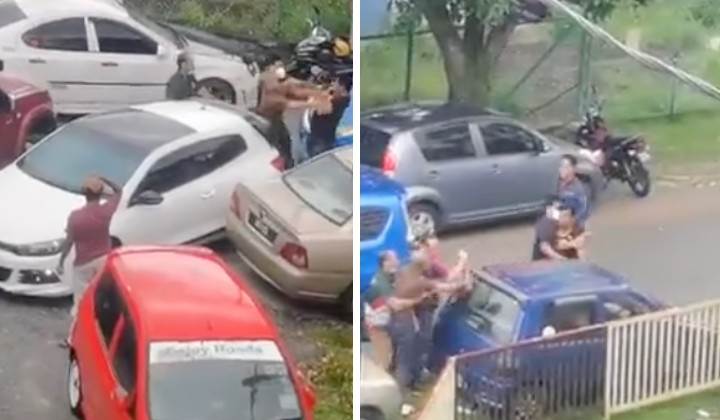 Traffic congestion is a real source of anger, stress and anxiety.

Our heart rate increases, and our muscles tense up – we’re primed for anger, especially when something gets in our way.

In any case, it’s no excuse to be angry and offended.

Recently, two men – believed to be parents picking up their children from school -exchanged blows after they refused to give way to each other at an intersection.

At first, they quarrelled and scolded each other, then they got into a physical conflict and threw fists at each other.

The incident was photographed and recorded by nearby residents who uploaded it on social media.

The video showed the two drivers refusing to give way to each other.

One of the drivers in a red pickup truck shouted at the driver of a white sedan to go away and called the other “stupid”.

The word angered the other party, who got out of the car and threw a fist at the other.

Not to be outdone, the pickup truck stretched out his hand from the car window to counterattack.

He then got out of the car and stepped forward to chase and beat the man.

A member of the public, believed to be a parent, tried to stop the incident but was unsuccessful.

The two drivers kept throwing punches at each other.

In the end, with the help of others, the two were successfully separated, and the conflict came to halt.

Use Your Brain, Not Your Fists

The video caused heated discussions among netizens who wondered why the two drivers used force to solve such a small problem.

In addition, some netizens blamed the conflict on cars on the roadside, saying those car owners should not park on the side of the road as it hindered traffic.

Police confirmed that they had received a report regarding the incident.

Acting Gombak District Police Chief Superintendent Noor Ariffin Mohamad Nasir said a report was made by one of the 57-year-old drivers involved in the incident.

He said the 2.30 pm incident started from a verbal argument between the complainant and a driver due to traffic congestion.

The fight was caused by the complainant’s vehicle blocking the suspect’s vehicle.

Noor Ariffin said his party asked for the cooperation of the public who saw and helped break up the fight to come forward to help the investigation.

The case is now being investigated under Section 323 of the Penal Code, which is the offence of intentionally causing injury.

How Should You Express Your Anger About The Traffic Jam?

Impatience is caused by an imagined lack of finishing something on time.

That schedule is often set in us by others. After all, you might get yelled at, spanked, or worse for being late.

The wrong way to deal with that fear is to lash out at the present situation with anger and turn the present event into someone else’s fault.

In those particular situations, it is better not to say anything.

It is best to cool down first, then communicate maturely with that person.

Speak honestly and openly but respectfully.

Grip the steering wheel and take some deep breaths.

It is a simple technique to release your stress.

Whenever you are stuck in traffic and do not know whether you can make it to your destination on time, play some music to ease your anxiety.