The homeowner’s wife was at home and heard the sound, but she thought nothing of it. 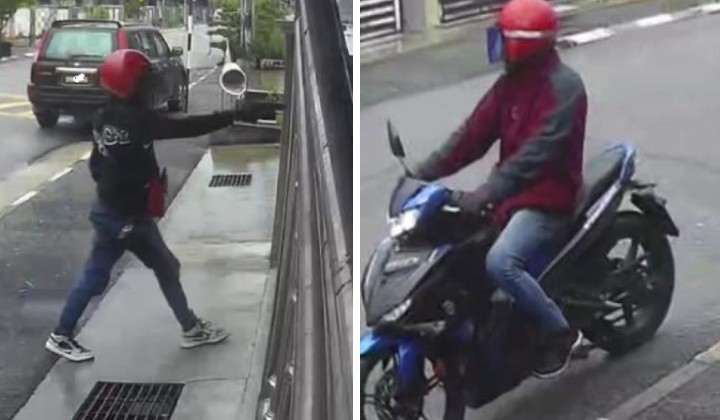 Crime can occur at work, home, or on the street, night or day.

While most crimes occur after nightfall for apparent reasons, it is better to be cautious at all times.

Recently, a shooting incident awakened a housing area in Sitiawan in broad daylight.

Two suspects on a motorcycle approached a house, and one of them alighted and pulled out a pistol to open fire.

After several shots, the duo escaped without a trace.

The incident was recorded on CCTV and had gone viral online.

No One Was Injured

Perak Police Chief Datuk Mohd Yusri Hassan Basri said at about 1.07 pm, the Manjung police received a call from a man about the incident in front of his friend’s house.

An investigation at the scene found that the victim is the house owner who lives with his wife and two children.

The man informed that his wife heard an explosion outside the house that morning, but ignored the matter.

Mohd Yusri said that at about 12.45 in the afternoon, the complainant had gone out of the house to run errands.

When he came back, he realized that there was damage to the rear window of his car and found bullet casings under the vehicle.

A police team from the Forensic Division, Criminal Investigation Department found a hole in the rear window of the victim’s car, believed to be the result of a gunshot.

Police also found a casing at the scene, next to the bullet head on the car’s bonnet.

One of the suspects appeared to have fired one shot and hit the victim’s vehicle.

The suspect then tried to fire again, but it is believed that his gun failed to work, and he then ran away with his accomplice on the bike.

The motive of the incident is still under investigation, and the case is being investigated under Section 8 of the Firearms (Heavy Penalty) Act 1971.

Mohd Yusri asked anyone with information about the incident to contact Manjung District Police Headquarters (IPD) Senior Investigating Officer, ASP Mohd Azalan Ab Karim on 019-3927837 or the nearest police station, to assist with the investigation.