Zus Coffee offered its customers a discount of 75 cents as an apology but it backfired. 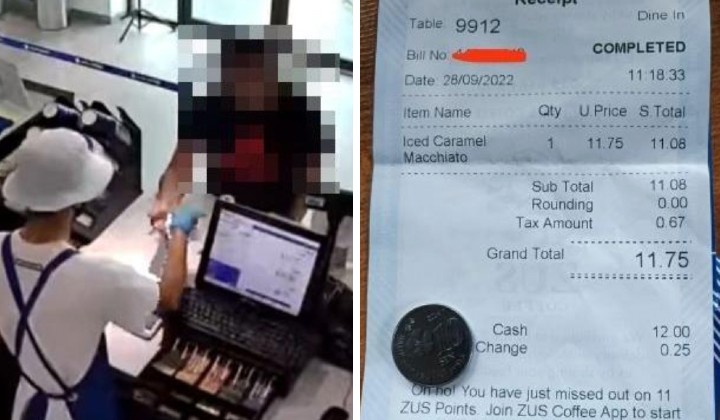 Is it illegal not to give customers their change?

After all, why wouldn’t a business not give a customer their change? It doesn’t make sense, and many customers regard that as stealing.

It is not wrong to accidentally or unintentionally not give customers their change, as anyone can make a mistake.

However, the matter can quickly get out of hand if the customer requests their change, which is withheld.

In the case of ‘tech-driven coffee chain’ Zus Coffee, the company had to apologise for not giving back the change, and the customer had to ask for it.

Zus Coffee also offered a 75-cent discount, but it only brought more criticism.

It all started when a customer at their outlet in Tanjung Malim expressed dissatisfaction when he wasn’t given the balance of five cents.

Through a post uploaded on social media, the customer, who goes by the username @Fdaus Ahmad on Facebook, said he had bought a drink for RM11.75.

He paid RM12 in cash, and the cashier only returned 20 cents.

Dissatisfied with what he considered being taken advantage of, the customer tried to reason with the cashier.

The customer argued that he shouldn’t be absorbing the 5 cents.

The cashier was taken aback by the dispute and had likely never encountered such customer requests.

In the end, the cashier gave him 30 cents.

The customer said it was not about the amount but rather the gentlemanly conduct between a business and consumers.

The post quickly went viral, and then Zus Coffee offered a 75-cent discount to its customers, which only brought more criticism.

Actually you want to apologise or directly promote people into downloading your app? https://t.co/s7OMOZ3sMx

Many netizens said they have decided to stop drinking Zus Coffee.

They supported the customer’s action of speaking up and upholding his rights.

Some said the apology only came about because the issue went viral.

Netizens, including the affected customer, also believe that many people had their 5 cents taken from them unwillingly.

In other words, Zus Coffee is accused of being unprofessional in handling a business transaction.

At the same time, netizens feel the apology was poorly worded and sounded evasive and defensive.

Some had called for the management, including Zus Coffee’s Chief Operating Officer, who signed the apology letter, to be sacked.

Sometimes Silence Is Better Than Words

Zus Coffee was also rapped for uploading a CCTV recording of the customer, exposing his face without his consent.

Netizens are also unhappy that Zus Coffee appears to justify the cashier’s action while putting the onus on customers to use its app and go cashless.

Some said that this was a non-issue in the first place but was poorly managed by Zus Coffee’s communications team/social media handler.

First u make fun of complaint, with sorry not sorry. Then u show recording of the customer, & compliment ur staff for handling situation well.
1. U were wrong, acknowledge & apologise proper.
2. Situation should never have happened.
3. Did you think ur response was good??

The barrage of criticism prompted Zus Coffee to say they are seriously considering the comments.

It reiterated that it was genuinely sorry about the matter and was merely trying to cheer things up.

Massimo Bread Prices To Increase Between RM0.10 to RM0.60, Except For White Sandwich Loaf