Yaya believes that Nigeria can learn from Malaysia’s multi-racial and multi-religion harmony. 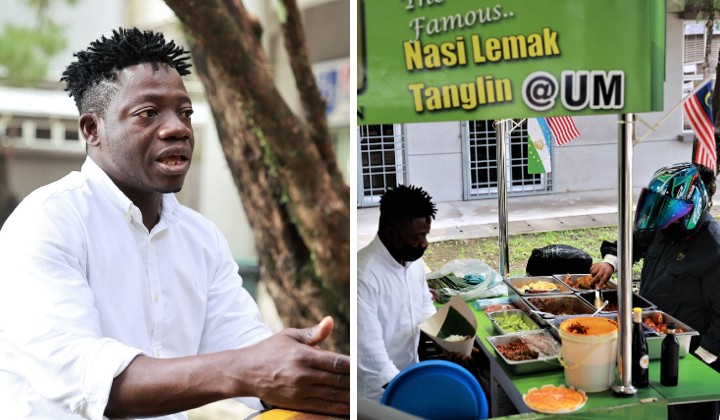 What has nasi lemak got to do with Nigeria, English Premier League (EPL) and the European football governing body UEFA?

A Nigerian man, Oluwashola Yaya Olukosi, or Yaya, sells nasi lemak at the University of Malaya (UM), and he is popular among UM students and staff.

I would wake up as early as 4am to take nasi lemak and side dishes from the main Tanglin Nasi Lemak branch at Tanglin Food Complex in Jalan Cenderasari. Business starts at UM at 7.00 in the morning.

Yaya on his daily life as a nasi lemak seller.

Having been in Malaysia since 2010, he has worked with Nasi Lemak Tanglin for more than eight years.

Granted, Nasi Lemak Tanglin is touted as one of the best in town, but his linguistic ability is probably a pull factor too.

Yaya epitomised the old saying that one should never judge a book by its cover.

He has various certificates in football coaching diploma including UEFA B Licence.

According to UEFA, European football’s highest body, the qualification allows Yaya to qualify as a coach for under-16 amateur clubs and an assistant coach for professional clubs.

His resume includes Wolverhampton Wanderers, the oldest club in the Premier League.

He was a coach for the under-12 and 13-year-old teams at Wolverhampton when he was in the United Kingdom.

The 1888–89 season was the first season of competitive league football in the history of English football club Wolverhampton Wanderers.https://t.co/FObOgBIOlW

After completing his studies, Yaya returned to his country of Nigeria, but job opportunities were very limited there.

He then remembered his tutor’s advice to find an opportunity to become a football coach in Southeast Asia.

When I started looking for information about Malaysia, I immediately fell in love with two pictures, the Batu Caves Temple and the Petronas Twin Towers. Without wasting time, I made the decision to migrate here.

Yaya on how he ended up in Malaysia.

Yaya, a Muslim, appreciates the multi-racial and multi-religion facets of the Malaysian community.

He said this is a new concept and something that might benefit his country.

Nigeria comprises several ethnic groups, the majority of which are the Igbo, Hausa and Yoruba.

Yaya added that there are many troubles in his country but declined to elaborate further.

Nigeria, one of the world’s poorest countries, faces an ongoing battle with insurgent groups.

@CIJ_ICJ @IntlCrimCourt
Nigeria military have continued to carry out their dastard act of planting IED in some parts of Biafraland to implicate IPOB ESN, thereby, tagging Biafrans terrorists to justify their extrajudicial killings in Biafraland. @SecBlinken @antonioguterres https://t.co/EOAhZ5h504

At the same time, continued government corruption threatens the stability and political integrity of Africa’s most populous state.

Can we pass a law to demolish the homes of politicians in Nigeria who are convicted in graft and corruption cases?

The poorest amongst us cannot be the only ones crying!