Nazirah graduated with a degree in entrepreneurship and has been selling takoyaki for more than a year. 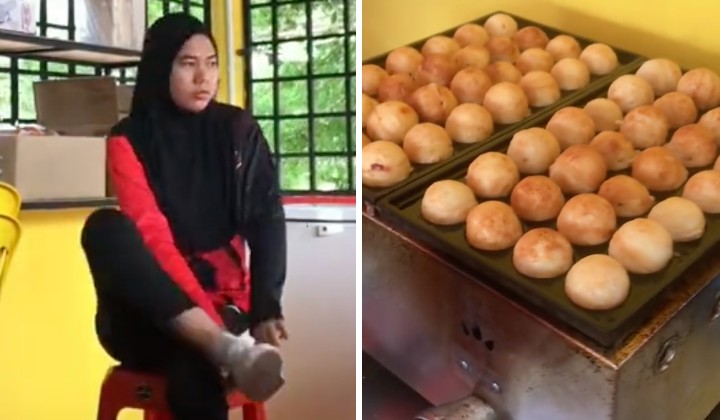 There is an idea that university graduates should work white-collar jobs as they tend to require bachelor’s degrees.

They are expected to work in an office and wear formal dress, with a suit and a tie for the men.

They also tend to earn higher average salaries doing highly skilled work and not have to perform manual labour at their jobs.

A 24-year-old graduate from Universiti Utara Malaysia (UUM) named Nazirah chose to do a job that didn’t require a degree.

Nazirah has persevered for more than a year despite being ridiculed by her customers.

A Career Failure Or A Waste Of Money?

Nazirah said she is used to being looked down upon due to the nature of her job, but a particular incident makes her want to express herself.

She recalled her encounter with an ‘uncle’ customer who questioned her wisdom in selling takoyaki despite being a university graduate.

At that time, Nazirah had just completed her industrial training and had started selling takoyaki full-time.

He started to chat with her like any other customer, but what he asked made Nazirah feel uncomfortable.

At first, we talked about common topics only. After that, he asked about my daily sales, if I could make up to RM100 or even RM200 a day.

University fresh graduate Nazirah on her encounter with the customer who asked too much.

Their conversation was not only about her business, but the uncle started asking about her education status.

Nazirah, who has been in the takoyaki business since March 2021, surprised the uncle with her reply.

She told him that she had just finished her practical and had not even gone through convocation.

University fresh graduate Nazirah on the unexpected questions from the uncle.

Then the uncle asked her what she wanted to do with the degree.

She promptly ‘ended’ the conversation by telling him she would look for a job soon.

Nazirah, who lives and runs her business at Felda Keratong 3, said she is used to such queries from her customers.

She admitted that the experience was frustrating, but she had no problem not working in a white-collar job.

After all, she is doing fine providing for the family, the business is growing, and it’s her preferred lifestyle.

Excellent Ramen For The Slurping Mob In Klang Valley