The aftermath was a scene of carnage among broken glass and twisted metal. 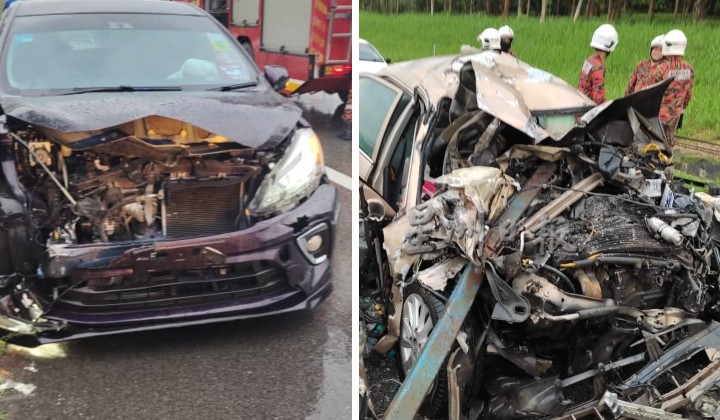 Accidents can happen anytime and anywhere, even when driving at lower speeds, in safer areas.

Three family members died, while another was seriously injured after the car they were riding in was involved in an accident with a trailer.

The tragedy happened at Kilometer 70.4 of the North-South Highway near Kluang, Johor, on Sunday (18 September) morning.

The incident happened at about 6.35 am with a Toyota Corolla driven by a family of four.

They were said to be travelling from Malacca to Johor.

Three victims, aged 18, 22 and 51, were confirmed dead by Ministry of Health personnel at the scene of the incident, while another, a woman in her 40s, was seriously injured.

Another accident victim died later while receiving treatment at the hospital, bringing the total to four victims.

Berita Harian quoted the Fire and Rescue Department saying that it happened when the Toyota Corolla crashed into the back of a trailer.

The heavy vehicle slowed down following a separate accident that occurred in front involving a Perodua Myvi, a van and two motorcycles.

The Perodua Myvi was said to be trying to avoid a puddle before turning due to heavy rain.

The incident was also widely shared on social media, with shocking photos of the carnage in the aftermath.