The food delivery rider waited more than 50 minutes for his customer’s order, which was still not ready. 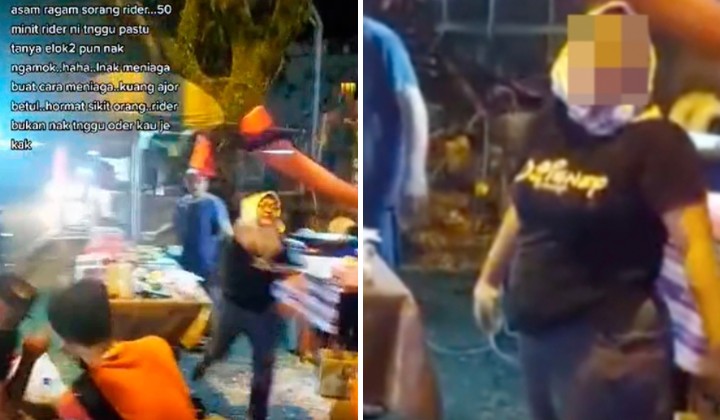 What happens when someone loses their temper?

A person might also become aggressive because they were enraged at another person.

Going viral on TikTok is the video of a female hawker hurling profanity and abuse at a food delivery rider.

The woman was heard saying that the food delivery rider was intolerant.

The video, lasting almost a minute, shows the woman in question hurling abusive words in front of several customers and other food delivery riders.

The incident is said to have happened at a famous burger stall in Cheras.

Time Is Precious And Priceless

It is understood that the complainant has been waiting a long time for the dealer to complete the customer’s order.

About 50 minutes passed, and the order was still not completed.

So, he decided to ask the hawker when the order would be ready.

Enraged by the complainant’s question, the hawker lost her cool and scolded the man, followed by abusive words, “F**k you!”.

There are a lot of Grab riders, too; there’s no one making a fuss like you!

The female hawker rebuking the food delivery rider for asking her about his customer’s order.

The woman threw a sauce bottle at him when the food delivery rider tried to record the commotion.

Her action drew the displeasure of several individuals at the scene, who then advised her to calm down and not act out of bounds.

At the same time, the food delivery rider said those whose queue was behind him had already gotten their order.

On social media, netizens criticized the hot-tempered attitude displayed by the woman.

They also urged people to boycott such rude hawkers.

Some said it’s too bad that the food is good, yet the customer service stinks.

Why Do People Make Other People Wait?

Some said the hawker should prepare the orders in advance since the burgers are often in demand.

They said the hawkers and traders must value the food delivery riders’ time.

Making others wait once in a while due to genuine reasons can be considered.

But doing that on regular basis shows they have no respect for people.

At the same time, netizens said the hawker lacks empathy and can’t or won’t imagine what it’s like to be the person waiting on them.

7 Places For Prawn Mee You Should Try In PJ & KL