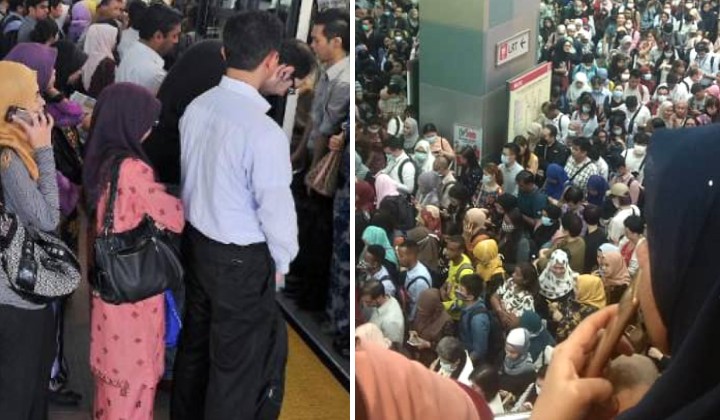 When it comes to rush hours, LRT commuters are being taken for a ride and feeling the strain.

So what are commuter rail issues in and around the nation’s capital?

Besides congestion and overcrowding, they have to deal with delays, and many expressed disappointment at queueing and waiting a long time.

These people rely on the rail network to get to and from work daily.

Taking their unhappiness to social media, they want to know why Rapid KL could not increase train frequency during peak hours.

Bearing The Brunt Of The Commuter Onslaught

Some said Prasarana CEO and Transport Minister should be sacked due to their failures in management in handling facilities built using taxpayers’ money.

Twitter users informed Rapid KL about the difficulties that emerged, seeing many passengers queuing until the exit at several stations.

Sharing a picture of the situation at Pasar Seni LRT station, Twitter user @RMuzmar urged RapidKL to give rebates to passengers as compensation for the problem.

What is happening to LRT Kelana Jaya line today? So crowded at Pasar Seni station

Another Twitter user, @Mohdazrai78, shared a photo of passengers at the same station.

It showed commuters being barred by security personnel from using the escalator up to the gantry area.

In response to the incident, RapidKL said they are supervising and monitoring the day-to-day operations of its passenger train fleet.

But commuters were not convinced, and complaints continued to surface.

If u care about your customer, you should foresee this situation to happen and come out with a solution before implementing any major maintenance schedule,…but no, just treat the passangers as heard of cows as they are still paying the same rate for this bullshit service

With a crowd like this in the morning, your frequency is every five minutes? You have to do better than that.

Twitter user @Dino_omar urging that trains depart from the stations on time.

RapidKL responded to the tweet by saying that the complaint had been shared with its team for follow-up action.

RapidKL also assured commuters that they would continue to monitor the current situation.

A video shared on social media also showed smoke coming out of a train carriage parked at the station.

Commuters had also been plagued by damaged escalators that seem to take a long time to be repaired.

READ MORE: Sri Rampai LRT Escalator Is Finally Fixed! But How Did A Clothing Company Get The Repair Contract?

These had contributed to the delays as train doors reopened when blocked.

At the same time, the feeder buses also suffer from various problems, including punctuality.