The mother gave in to her husband’s perverted desire for fear of being divorced. 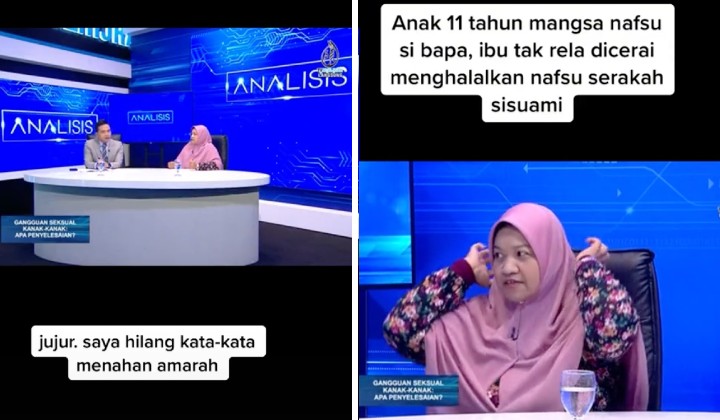 When asked, most people are insistent they would speak up if they knew of sexual abuse.

In reality, they usually do not.

The ordeal was revealed by Suzana Ghazali, family psychology and Syariah legal consultant, while on a TV talk show.

Suzana said the young victim was born to the mother and her ex-husband.

The mother sacrificed her daughter’s dignity and “legitimized” her husband’s misdeeds to save her second marriage.

The victim’s mother did not want to be divorced because she could not satisfy her husband’s perverted sexuality and refused to call the police.

The mother also told me that her husband gave her three options at the time, the first was to let her daughter sleep with him. If not, then let him watch… If neither is possible, then the only option is divorce.”

After the guests who participated in the program listened to the story, they had a heated discussion.

They questioned how could a family become a protective umbrella for children if even parents regarded this shameful behaviour as legal and were unwilling to report it.

A journalist, @dinnieasyraf, uploaded the talk show to TikTok and stirred even more heated discussions among netizens.

Many people were stunned when they learned the ins and outs of the stories shared by the guests.

They could not agree with the actions of the victim’s mother and believed that this incident reminded them of the sexual assault of a Malay female artist by her father.

Betrayal, Trauma, And The Consequences

Most netizens condemned how a mother could let her daughter suffer like this at a young age.

The Women’s Aid Org (WAO) and All Women’s Action Society (AWAM) will support you if you or a woman you know is living with or at risk of violence.

Data from the Royal Malaysia Police has revealed that most child sexual abuse cases involves perpetrators the victim knows, most often their biological or step fathers.https://t.co/4WPCHwm9vS

Restaurant Owner Humiliates Family Who Can’t Afford Their Meal, Stranger Steps Up To Pay The Bill