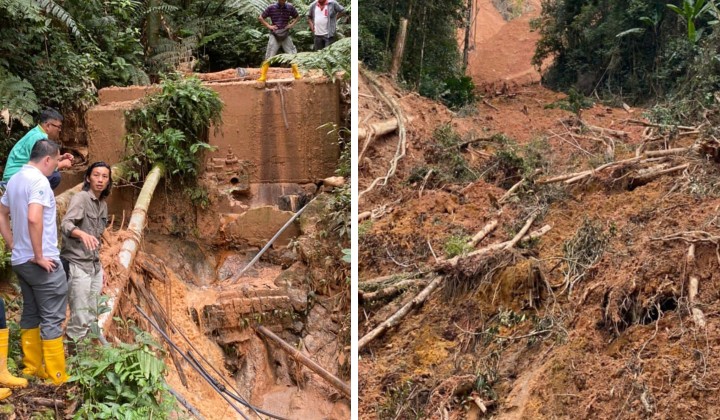 The forest area near the Kampung Raja New Village in Cameron Highlands is in danger of a massive landslide due to deforestation.

He said the clearing started more than a month ago, involving a land size of 6.475-hectare.

As a result, the soil is being washed away, triggering a crisis of landslides and destruction of the village.

Chiong said the landslides caused many villagers in Kampung Raja to feel very worried and uneasy.

The Impact Of Agriculture On Landslide Triggering

Chiong said there was an illegal vegetable garden in the area a few years ago.

Law enforcement units destroyed it in the name of “protecting the environment”.

The action was taken during Ops Gading, a series of operations started in 2016 to curb land encroachment activities in Cameron Highlands.

Therefore, no one has conducted agricultural or development activities in the area for many years.

Today, the state government and relevant agencies have turned 180 degrees and approved large-scale development projects in this area. Compared with the law enforcement actions of the past, there is no doubt there is double standards and hyprocisy.

He reiterated that residents are deeply concerned since the affected area is very close to Kampong Raja New Village.

They are worried that the muddy water, trees and garbage will pour down the hillside when it rains heavily.

Residents fear a scenario similar to the floods that happened not too long ago in Karak, Pahang and Baling, Kedah.

Caused by the release of water from the Sultan Abu Bakar Dam, it was considered the worst compared to past disasters.

Take Action Before Its Too Late

As one of the short-term plans, Chiong suggests that the state government immediately install a flood monitoring system on high-risk hillside areas.

The purpose is to monitor the movement of the mountain around the clock.

If you plan to go to Cameron Highlands, think again guys. It is learnt two vehicles were buried in a landslide at Section 27 of Jalan Simpang Pulai-Cameron Highlands. The number of victims has yet to be known. pic.twitter.com/13riMZhAfG

At the same time, it can issue warning signals before danger comes and notify villagers to evacuate immediately.

Chiong also urged the state government and relevant agencies to face up to the severe problem and residents’ concerns.

Stop cutting down trees in this high-risk area, and implement a series of restoration work to stop the landslide crisis. At the same time, replant trees in the area, build drainage systems and repair hillsides to prevent soil erosion to avoid flash floods.