The Singaporean mom claimed that police released the suspect shortly after detaining him. 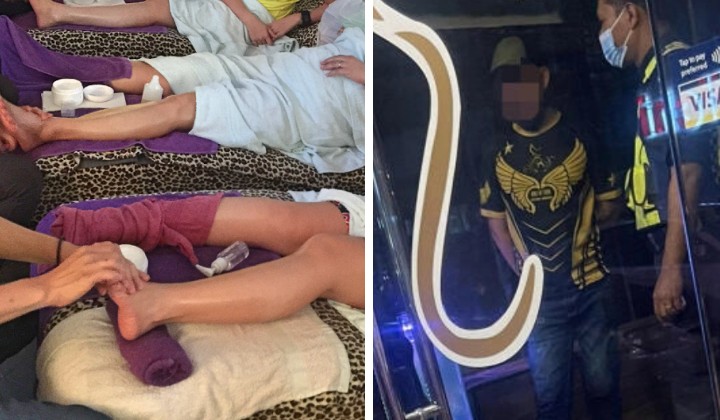 An outing by a family of four from the Lion City turned horrible when, during a massage in Kuala Lumpur, their 20-year-old daughter was molested.

The offence was allegedly perpetrated by a male masseuse who kissed her nipples and almost raped her.

It happened at about 12.30 am on Tuesday (6 September) at a massage parlour in Bukit Bintang.

The family had reported the incident to the police.

The mother also sought help and advice from an influencer and food reviewer, who exposed the incident online.

The victim’s mother said in an interview that the family set out for a visit to Malaysia last Saturday.

On the last night of the trip, she and her husband brought a couple of children for a massage.

My husband and I were upstairs for a foot massage, and my daughter and son were downstairs for an oil massage.

The victim’s mother recounting how the incident started.

After the massage, she pointed out that her daughter did not immediately inform her about the sexual assault because she was too frightened.

When the family returned to their residence, her daughter suddenly collapsed and cried, and she revealed the matter after questioning.

The daughter said that the masseuse played with her nipples and put his lips there.

The suspect allegedly almost penetrated her lower body with his fingers, but her daughter promptly stopped him.

The mother immediately returned to the massage parlour, but the businessman was uncooperative.

The masseuse even boldly said that such a massage was typical, and the mother was so angry that she immediately called the police.

The mother said that after returning to Singapore, she also brought her daughter to the police station for the record yesterday.

When questioned, the local police confirmed that they had received a report.

The mother said her daughter was severely traumatized physically and mentally and is now emotionally unstable.

For a mother, seeing her daughter in this state left her heartbroken, and she blames herself.

My daughter cried every day. She told me that she tried to wash off the filth from her body every time she took a bath. I was very heartbroken and blamed myself for not being by her side when the incident happened. I have consulted a doctor, and I will let my daughter receive counseling later.

The victim’s mother on the ordeal her daughter is going through.

In response, many netizens pointed out that her daughter should not seek a masseuse.

They made harsh criticisms, prompting the mother to call on netizens to stop.

The mother pointed out that her daughter was the victim and urged netizens not to make judgments before getting the complete picture of the incident.

First, I didn’t know that my daughter was being served by a masseur; second, I didn’t think there was a problem with finding a masseuse, just like women would ask a male doctor for gynaecological examinations and delivery; third, my daughter she is relatively big, and she usually finds a strong masseuse or male masseuse for massage.

The victim’s mother responding to criticism from netizens.

She added that the massage parlour looks very high-end and the price is not cheap, hence she didn’t expect this to happen.

Eventually, she decided to turn off comments for the Instagram posts because some of the comments were not helping.

Some even started arguing and fighting, and the mother is sad that victims are always held accountable in molesting and rape cases.

She said this is why not many are brave enough to come forward to share their stories.

Rather than blame the victim, she urged others to try putting themselves in that person’s shoes and perhaps to have a little empathy instead.

Expectations And Disappointments With Police

The mother said that the masseur involved was released after being held for several hours.

She added that after the police arrived at the scene, they kept asking her and the daughter to repeat the incident, which made her feel humiliated.

According to her understanding, although the massage therapist was arrested on the spot, he was released after only a few hours of detention.

On the other hand, she and her daughter waited at the police station for more than 5 hours and did not record their statements until 6 am.

She also claimed that when she asked the Malaysian police for the report, they refused to give it.