According to the victim, Touch ’n Go refused to refund him as the transactions were verified with OTP. 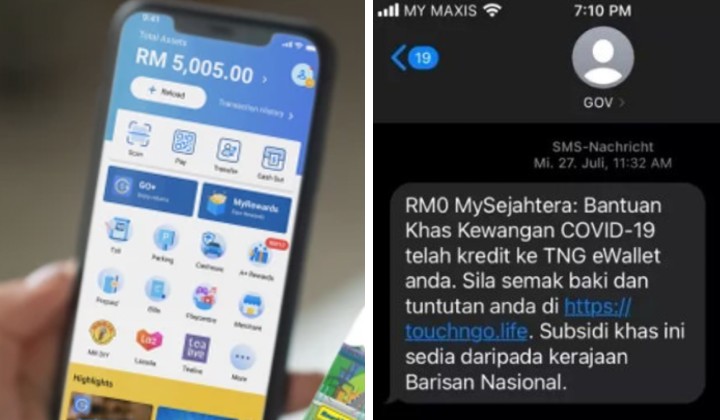 We all love free stuff from the government, especially money.

This is why scams always prey on the weaknesses of human nature.

And sure enough, people continue to become victims.

Recently, a man complained that he received a text message from the sender “GOV” on his mobile phone.

The message informed Clinton Khor, 27, that he had received special aid from the Barian Nasional government.

It said that the amount had been transferred to his Touch ’n Go e-wallet and asked him to click a link to confirm the amount received.

Too Late For Sorry

Khor, who shared his misfortune with World Of Buzz, ended up losing RM4,600.

After he clicked on the link, Khor was led to a Touch ’n Go e-wallet login page.

He suspected something wrong after he had keyed in his login details twice and yet couldn’t log in.

There were 16 transactions totalling RM4,890 that were automatically reloaded to his Touch ’n Go account through his linked credit card with a bank.

Another nine transactions totalling RM4,547 transferred his money to another bank account through DuitNow, a simple and convenient way of transferring money.

He also called Touch ’n Go afterwards to report the scam and asked to freeze his account so that he could get his money back.

Khor claimed that Touch ’n Go rejected his request as the transactions were verified using OTP (One Time Password).

I only received 2 OTPs that day, but 16 transactions came in and nine went out. It is clear that the crooks are automatically reloading and transferring funds without any form of confirmation.

Khor has filed a police report, and an investigation into the bank is ongoing.

He is not blaming anyone and needs the money back for his education.

Khor even created an online petition asking financial institutions to allow users to reverse a transaction.

Touch ‘n Go had reminded customers to be cautious of scammers.

Please note that Touch ‘n Go will never ask for your personal and/or banking information, such as your bank account number, OTP number, PIN or password.

Users are advised to re-confirm any information related to Touch ’n Go directly with the company through its careline number 03-5022 3888 or reach out to them on official social media platforms.

Are you sure it’s a scam? I received the same SMS with a reload PIN, and also an e-mail from TnG with the same reload PIN. pic.twitter.com/r60f5p9F1P

READ MORE: SMS Saying Money Is Credited To Your TnG eWallet Is A Scam