The Singapore Food Agency has ordered a recall as the benzoic acid level exceeded permitted levels. 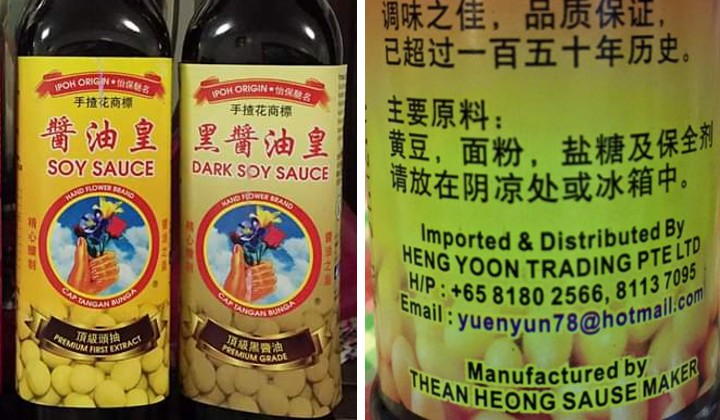 A Malaysian soy sauce brand sold in Singapore been recalled by the Singapore Food Agency (SFA).

Food recalls are removals of foods from the market that violate the regulations set by the authorities.

The brand in question is Hand Flower, which is from Ipoh.

The product is said to contain benzoic acid that had exceeded the regulatory limit.

SFA added that the use of benzoic acid was also not stated on the food packaging label.

SFA noted that one-off consumption of the affected product is unlikely to be a food safety concern.

However, there’s a risk when people consume food with high levels of benzoic acid over a prolonged period.

This is because even though benzoic acid is a common additive which is safe when used in small quantities, studies in animals fed with high doses of benzoic acid have shown disorder of the central nervous system as well as changes in their brains.

SFA on the danger of eating food with excessive levels of benzoic acid.

The agency had previously recalled food items which were also found to contain benzoic acid.

The product’s importer in Singapore, Heng Yoon Trading, is currently recalling the affected product and has issued a notice on social media.

The recall applies to all Hand Flower brand soy sauce with the batch number KSS0 125 and the best-before date of 26 July 2025.

Why Is Benzoic Acid Used In Food?

Benzoic acid inhibits the proliferation of bacteria and yeasts, a significant cause of food spoilage.

It is approved for use in many countries and is generally recognized as safe in foods according to the U.S. Food and Drug Administration.

When not being used as snow, benzoic acid is often used as a food preservative. It can also be used in cosmetics, dyes, plastics and insect repellent! Very versatile!#christmasscience#ChristmasCountdown #Christmas #Christmas2020 #ChristmasIsComing #AdventCalendar #chemistry pic.twitter.com/zLngEkCgUD

While low exposure to benzoic acid appears to be non-toxic overall, consuming a high amount may be poisonous.

However, it would be difficult to consume so much of it in foods (both natural and processed) that it would be lethal.

Exposure to benzoic acid in high concentrations, particularly in susceptible individuals, may cause a skin allergy.

If you think you or someone you know became sick from eating a particular food, contact your local health department.