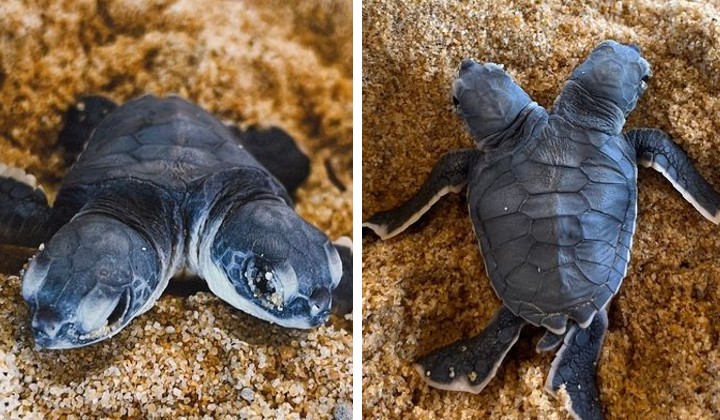 A green sea turtle (penyu agar) hatchling caught the conservationists from the Lang Tengah Turtle Watch by surprise last Tuesday (30 August 2022) when not only one but two heads appeared during their post-emergence inspection around 11 am at the Tanjong Jara Resort project site in Dungun, Terengganu.

As reported by Sinar Harian, this is the first live double-headed hatchling discovery found in the said conservation centre according to Abidah Zaaba, the head of the conservation project.

“Everyone was excited when we saw the two heads. This is a very rare occurrence.

“There was another same find last June but when we found it, it was still inside its egg and was already dead.”

Post-emergence inspection is often done by them to identify the percentage of turtles hatching. This particular one is believed to hatched 3 to five days before it was found on Tuesday.

According to Abidah, the turtle has dicephalism, a rare condition for sea turtles caused by genetic factors.

Some interesting observations done by the team were:

The special hatchling was handed over to Rantau Abang’s Turtle Conservation and Information Centre (TCIC) on the same evening that it was found. This is because the team do not have the facility, skill and expertise to protect and care for the said hatchling, currently.

However, TCIC is only 15 minutes away from their project site, so they will be keeping tabs on the hatchling development as long as it lives.

Abidah joined the conservation project in 2017 and explained that usually, these types of turtles have a fewer survivability rate (up to two or three months) as compared to normal turtles.

A similar case was recorded in Pulau Mabul, Semporna, Sabah in 2019 where a two-headed green turtle hatchling was found and died only three days after.

Another case back in 2014 tells the same discovery of a two-headed hatchling in Pulau Redang, Terengganu, but it also died almost 3 months after due to pneumonia.

Abidah hopes that this baby turtle could live quite a long life this time for the sake of research and conservation.

The Lang Tengah Turtle Watch Conservation Project in Tanjung Jara Resort has saved around 93,660 green sea turtle and painted terrapin eggs. They have also successfully released 66,037 baby turtles back to the sea since their inception in 2016.

This year only, around 20,351 green sea turtle and painted terrapin eggs from 278 nests have been successfully incubated at the centre.

Watch the video below for the momentous miracle.

What a discovery! Double-headed hatchling 🐢