The GrabFood rider slammed his motorcycle into the robbers in an attempt to foil the robbery. 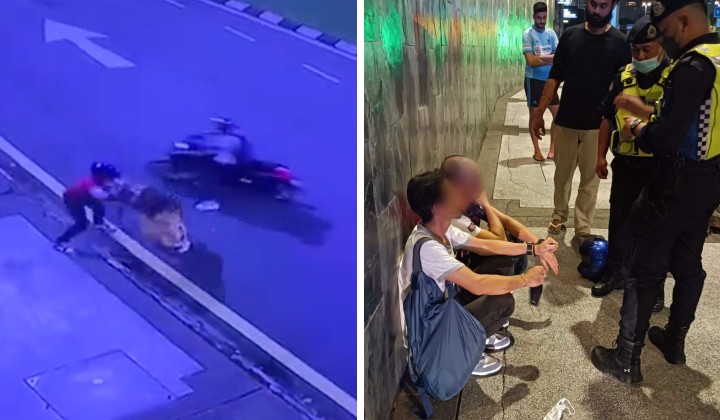 Being a food delivery rider is more than just sending food to the people.

Like many motorcyclists, they are the first to help when an emergency, such as a road accident.

Recently, a GrabFood rider in Kuala Lumpur turned vigilante when he foiled an attempted snatch theft in broad daylight.

The GrabFood rider wasted no time when he saw two suspects on a motorcycle robbing a woman by the roadside.

He slammed his motorcycle into the suspects in an attempt to stop them.

The suspects refused to give up, and the GrabFood rider stepped down from his motorcycle to engage them.

Soon after, other passersby also stop to help.

According to Sin Chew, the looting occurred at around 8:22 pm on Sunday (21 August).

Surveillance footage showed that the victim was walking alone on the side of the road when two robbers passed her on a motorcycle.

One of the robbers snatched her belongings in a place the CCTV did not cover.

The woman resisted hard, clutching her backpack tightly, and both sides chased on the road.

Just as the suspects were about to flee, the GarbFood rider hit their motorcycle from behind.

The surveillance footage showed that several motorcycles and cars were parked on the side of the road at this time, and everyone rushed to the scene to rescue them.

One rushed over from the opposite lane to assist and accidentally fell during the period.

No Excuse For Being Vigilante

Today, beating a stranger on the road for allegedly committing a ‘crime’ has become a trend.

In some instances, the criminals beg the police for help, fearing being beaten up by the angry mob.

In this case, netizens pointed out that the suspects were lucky as they were not beaten up.

Police have advised the public not to act hastily and leave it to the authorities when they encounter criminal activities.

The Royal Malaysia Police has released a press statement regarding recent acts of vigilantism in Kuala Lumpur. "The Police will not hesitate to take action against those who continue to partake in
vigilante activities."

Lodging a report was vital as it allowed police to conduct a proper investigation.

In any case, the GrabFood rider received a lot of praise despite it being his seriously dangerous action.

Some praised him for sacrificing his motorcycle without thinking twice.

They said he deserves financial help to cover the motorcycle repair cost.

READ MORE: No Disruptions On Food Delivery Services Yet Despite Purported 24-Hour Strike By Riders