The scammer got hold of both her and her husband’s online banking credentials. 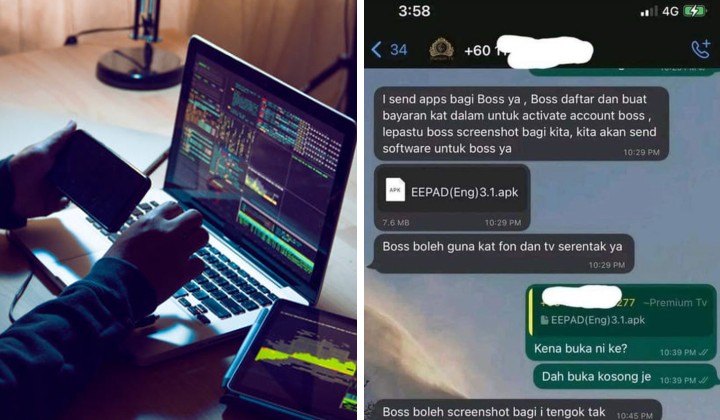 Scammers are constantly coming up with new methods to steal money.

Among the new tactics gaining notoriety is getting victims to download APK files with fake mobile apps.

A Facebook user, Aisyah Nasri, shared that she and her husband Muhammad Sidek lost RM10,000 due to downloading an application through WhatsApp.

Aisyah never imagined that she could fall victim just by downloading an application and lose a large amount of money.

Start Chat With “Seller” To Try The Application

The incident started on 10 August when she tried to search for Internet Protocol television (IPTV) apps as they wanted to terminate their Astro subscription.

She searched on social media and found an advertisement for such apps in a Facebook profile which had since been deleted.

She started a chat to try the app, and the seller sent her an app through Whatsapp.

The apps can’t be opened because she is using an iPhone, and the seller told her to use an Android phone instead.

Without much thought, she sent the apps to her husband’s phone, which is an Android device.

The Victim Tried To Sign Up For the Downloaded Application

After signing up, she tried to make a payment using the m2u login credentials.

At first, she used her username and password, but it didn’t work.

She tried using her husband’s account, but it didn’t work either, so they just left it there.

Aisyah realized that the money in the account was missing when she tried to make one transaction on the night of 11 August at 10 pm.

She was surprised that money was transferred in two transactions to her husband’s account, amounting to RM10,000 in total, and immediately called her husband to check.

The Bank Confirms She Has Been Cheated Through The Application

She called Maybank directly for confirmation.

How can there be a transaction when I don’t receive any TAC numbers? The officer on duty asked me if I had downloaded any apps recently. Bingo! Really had been scammed! The app is malware!

Through the malware, the scammer could capture their m2u username and password.

After the RM10,000 went into the husband’s account, it was sent to a Shoppe account ostensibly to hide the movement of the money.

Aisyah said the money in her husband’s account had also ‘disappeared’.

She is thankful that it was discovered early and that she had set a daily transaction limit.

Aisyah feels she will likely lose another RM10,000 if she only realised it the day after.

She advised the public not to simply download any suspicious apps and only increase their daily transaction limit per day if necessary.

She also hopes her sharing can be used as a lesson for the public to always be vigilant in taking any action related to banking transactions.