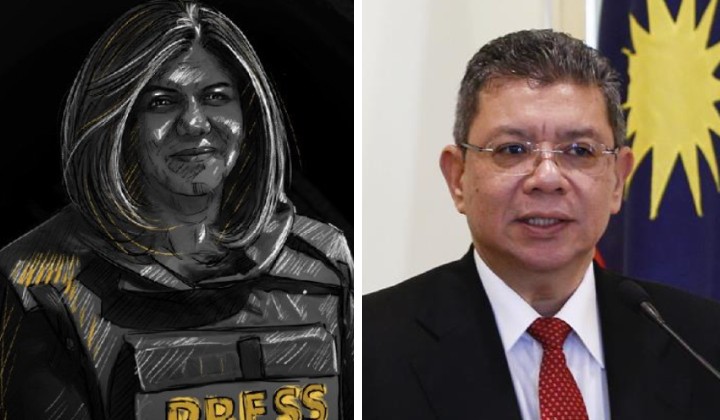 Foreign Minister Datuk Saifuddin Abdullah stressed that Malaysia could not recognize Israel and would continue to speak out on Israel’s atrocities on Palestine.

He said Malaysia would lose moral standing if it recognised Israel’s takeover of Palestine territories.

Wisma Putra conveyed Saifuddin’s remark at a gathering by the international radio and TV broadcaster of Qatar, Al Jazeera.

Israeli forces killed the Palestinian Al Jazeera journalist on 11 May while she was on assignment covering Israeli army raids in West Bank.

Al Jazeera demands justice for Shireen and accountability for her killers. #JusticeForShireen pic.twitter.com/Vny4tnRzOw

During the gathering, members of the press and non-governmental organizations (NGOs) held posters of Abu Akleh wearing a press vest.

Abu Akleh joined Al Jazeera Media Network in 1997, a year after it was launched, as one of the Qatar-based Arabic-language network’s first field correspondents. Her many important coverages include the second Palestinian Intifada in 2000.

He said the late Abu Akleh was a Christian, which shows the Palestinian issue is not merely Muslim or Islamic, but a humanitarian one.

He added that Israel’s atrocity knows no bound.

The regime’s forces targeted mourners during her funeral because they did not want them to walk with Abu Akleh’s coffin.

Everyone switch on to Al Jazeera right now. This is one of the most horrifying things I’ve seen.

IOF is attacking mourners carrying Shireen’s body from the hospital right now. They’re using stun grenades and tear gas and charging at them with horses and batons. pic.twitter.com/wUY80WO6su

At the same time, Samer Fariq also expressed gratitude to Malaysians for their steadfast support of the Palestinians.

While Malaysia officially maintains an outwardly hostile position towards Israel, there are businesses between the two countries.

The main products that Israel exported to Malaysia were planes, helicopters, and/or spacecraft, integrated circuits and liquid dispersing machines.

Malaysian products have been exported to Israel through third-party countries such as Singapore and Hong Kong.

They include broadcasting equipment, furniture and insulated wire.

Malaysian passports bear the inscription “This passport is valid for all countries except Israel”, but most visitors from Malaysia can travel to Israel without restrictions.

So as long as you’re not Muslim in Malaysia, you can travel to Israel under pilgrimage visa