Malaysia beat eight times winner Iran in a 4-4 thriller to crown champion for the first time. 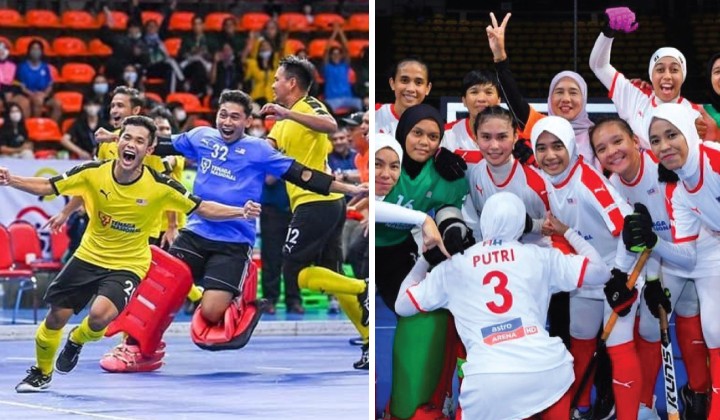 These days it’s joyous being a Malaysian sports fan – national athletes from e-games to gymnastics have brought the good times back.

It wasn’t easy; they had to defeat defending champions Iran 3-2 in a shoot-out at the Huamark Indoor Stadium, Bangkok, Thailand.

The goals of Muhamad Izham Azhar, Norsyafiq Sumantri and Shello Silverius during the crucial moment of the shoot-out decision, in addition to the authority of the national goalkeeper, Mohd Khairul Afendy Kamaruzaman, crowned Malaysia as champions for the first time.

Malaysia, ranked 21st in the world, and Iran, ranked third in the world, tied 4-4 after 40 minutes, leading to a shoot-out to find the winner.

Even sweeter for the National Squad when the final match against Iran saw Norsyafiq Sumantri named as the match’s best player.

No World Cup Despite Win

Unfortunately, despite being the Asian champion, Malaysia will not be playing at the Covid-delayed FIH Hockey World Indoor Cup from 5 to 11 February 2023 in Pretoria, South Africa.

Due to the pandemic, the 2019 results will be used for World Cup qualifying instead.

Iran was the champion of the 2019 edition, while Malaysia won the bronze medal.

Malaysian men’s team coach Amin Rahim was philosophical when expressing his feelings to the media.

Even though this edition does not offer a World Cup ticket, the entire team is on cloud nine as we had lost earlier to Iran, but we made it count when it mattered most.

Malaysian men’s team coach Amin Rahim lauding his men for being the best despite no chance to play in World Cup.

Amin is grateful for the success and new history created by his men and hopes that more attention will be given to the Indoor Hockey Games, which he describes as having great potential.

He said the players’ determination to play hard to achieve the team’s goals should be commended.

He pointed out that the players endured a challenging period of seven games in eight days.

Earlier in today’s match, Malaysia was surprised by Iran’s early goal through a penalty corner in the third minute, which Mohsen Bohlouli finished before Muhammad Ashran Hamsani tied the score back in the 12th minute through a field move.

In the 16th minute, Shello Silverius puts Malaysia in front before Iran equalized thanks to Amirmahdi Mirzakhani’s field goal to close the first half with both teams tied 2-2.

Six minutes into the third quarter, Mohd Norhafizie Jamil Azomi scored his first goal of the tournament in the final stage, which also put Malaysia back in front, and Iran again chased the position through Mohammad Karimi’s field goal in the 32nd minute.

In the 36th minute, Muhammad Ashran Hamsani’s turn again to put Malaysia ahead, and Hamid Nooranian’s penalty corner goal in the 38th minute took the match to a shoot-out.

At the same time, the national women’s team beat six-time champions Kazakhstan 2-0 for bronze in the same tournament.

The success of the women’s squad saw them create a better record than in 2019, where they finished the tournament in fourth place overall.

Team captain Juliani Mohamad Din was named the best player for the game.

Congratulations to the Malaysia Women’s Team for finishing in third place pic.twitter.com/ylOxrR6Zvy