Bung said the hunting and killing of crocodiles on a regular basis is needed to reduce its population. 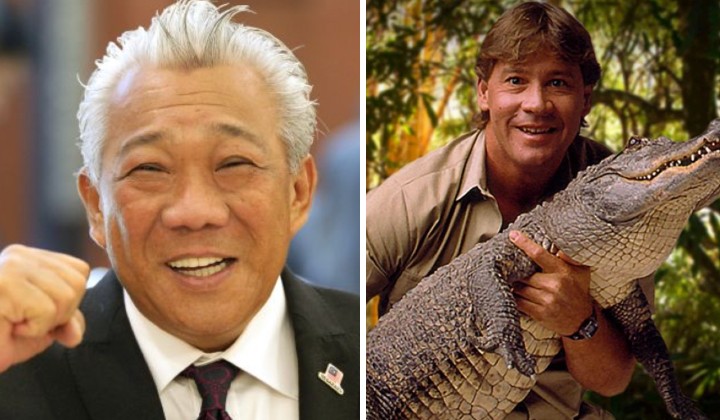 What to do if you have a crocodile infestation in the rivers?

The outspoken BN stalwart said the state government is aware that attacks by crocodiles on humans were becoming more widespread.

The rise in attacks led to the belief that their number (crocodiles) is too many, said Bung.

Or they have a lack of food and now come out to start attacking humans. We don’t know. Although there is no official number, but every night along the Kinabatangan River, we can see several pairs of eyes if we shine a flashlight towards that area.

Utusan Sarawak quoted him as saying that the Sabah Ministry of Tourism, Culture and Environment has started to offer jobs to catch the reptile.

Those who possess the skills, presumably like the late Steve Robert Irwin, are encouraged to apply.

Nicknamed “The Crocodile Hunter”, he was an Australian zookeeper, conservationist, television personality, wildlife expert, and environmentalist.

His life was cut short when he was impaled through the chest by a stingray in 2006.

I believe in this situation, Steve Irwin The Crocodile Hunter would say -“Crikey!, What a Beauty!”
It was a pleasure to visit the Everglades, and lay eyes
on this beautiful American Crocodile. Truly an
amazing creature to see, I was blessed to see a couple
of these!! pic.twitter.com/nhXaxeZws2

Previously, Bung has reiterated that Sabah needs to follow the footsteps of Sarawak, which is also infested with crocs.

He said the crocs must be taken captive to ensure the safety of the people, especially those who live near the river.

Bung has also proposed that crocodiles in Sabah can be hunted and traded to encourage more people to capture the reptile.

So, I am always looking for a way to invite or call professional hunters like in Sarawak to ensure that the number of crocodiles in Kinabatangan can be reduced.

Easier Than It Seems

No party has yet taken a license to hunt crocodiles, with the Sabah government easing restrictions following the increase in the number of deaths from reptiles along rivers in the state.

Sabah Wildlife Department director Augustine Tuuga said there had been inquiries from the public in Tawau and Sandakan about the procedure to obtain the license, but there have been no applications yet.

In the past, only crocodile breeders obtained a license to catch crocodiles to introduce new blood to their captive population, he told BeritaKini.

The wildlife department does not have specific criteria for crocodile hunting licences.

They can catch but cannot export skin or meat because Sabah does not have an export quota for crocodiles taken from the forest. (Crocodile produce) is only for consumption in Sabah.

Those who want to farm crocodiles can also apply for a license to catch the animals.