Shipbuilder Boustead said some parts of the LCS are becoming obsolete but can still be used. 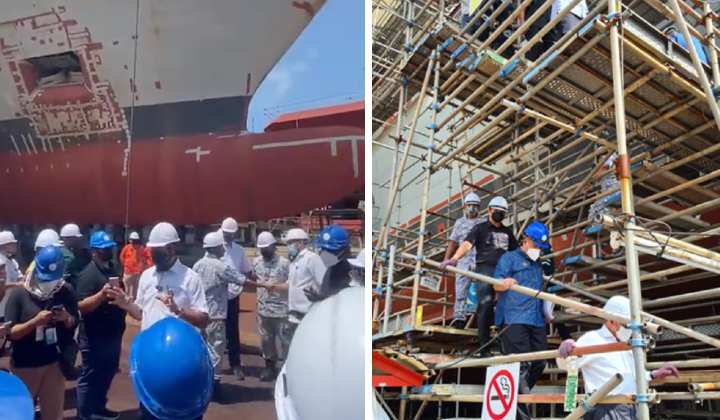 A media tour can be an excellent opportunity to gain positive press for an organization.

It can also backfire if specific steps aren’t taken.

In the case of the troubled Ministry of Defence (Mindef), attempts to shore up its standing with an aroused and irritable public opinion are seemingly alienating instead of strengthening its cause.

According to him, the progress is as follows:

The five ships under construction with various stages to be completed signify that the RM6 billion spent by the government has been proven. We have set the path and level of capability, so please give us the opportunity and space to show the reality.

During the two-hour tour, the media were taken to see the progress of the first LCS construction and to view the BNS ship storage warehouse that houses the equipment related to the LCS project.

Azhar is hopeful the public will now believe that ships exist, adding that the ships are made of steel and not wood.

The  Parliamentary Public Accounts Committee (PAC) had exposed the skeleton in the cupboard.

In a report of nearly 250 pages, PAC revealed that RM6.083 billion had been spent on the direct negotiation project, yet not a single ship had been completed.

Just simply shocking! The whole contract is RM9.13 billion for 6 combat ships. RM6 billion paid, but only one ship was delivered so far, which is only 44% completed, and not the Sigma-class vessel wanted by the Navy, but a Sigma-class vessel!! https://t.co/LCw3Kx2P15

Nothing To Hide Or Show?

Critics said the ship shown to the media – far from the RM9 billion spent so far – looks more like scrap than a vessel that can contribute to the operational competence of the navy.

They pointed out that the ship seemed pretty much the same, if not worse, compared to what it was five years ago when it was presented to VIPs.

At the same time, netizens continued highlighting how the cost had ballooned over the years as the project dragged on.

People also see that RM1.4bil of LCS allocation had been used for other purposes, including cost overruns.

Netizens added that the scandal should not be compared to Penang’s controversial undersea tunnel project.

The blame was also pinned on Umno as the dominant member of the Barisan Nasional (BN) coalition.

They argued that Umno should own up to its mistake instead of taking potshots against the Opposition.

At the same time, critics said the relevant ministers in charge back then should be held accountable.

They said there should be no excuse as the maths just don’t add up.

Meanwhile, Senior Defence Minister Datuk Seri Hishammuddin Hussein said the government would ensure the LCSs were delivered at the end of the day.

He regretted the project’s shortcomings and assured wrongdoers would be brought to justice.

All eyes will undoubtedly be on the investigation paper prepared by the Malaysian Anti-Corruption Commission (SPRM) to uncover the truth.

SPRM, tasked to hasten its investigation by Prime Minister Datuk Seri Ismail Sabri Yaakob, has submitted its findings to the Attorney General’s Office for further action.

With the 15th General Election looming, the stakes could not be higher.