The victim suspected something amiss when he was told to make more purchases in order to get his commission. 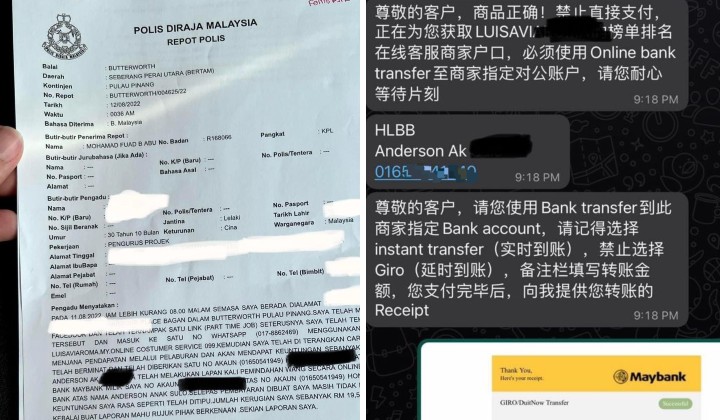 A man wanted to earn some extra cash by working part-time, but he didn’t expect to be defrauded and lose savings of RM19,542 overnight

The victim, Pang, now has only RM21.20 left in his bank account.

Sin Chew reported that Pang shared his unfortunate experience in a Facebook group, hoping that the public would not be similarly deceived.

The bank account is suddenly empty, and the family is waiting for expenses. It is the main source of income for the family. I don’t want to ask for favour, and I don’t want to borrow money. Next week is the mortgage loan, and the credit card bill is coming.

Online fraud victim Pang on his predicament after falling victim to the fraud.

According to a police report uploaded by Pang, he saw and clicked a link for a part-time job on Facebook.

The link opened up WhatsApp, and he contacted a company.

Exploiting Malaysians Who Are Working From Home

The company told him he would earn a 5% profit on every online purchase transaction.

From the screenshots he uploaded, it can be seen that this company is a clothing company on the surface.

The part-time job supposedly required him to pay for goods after placing an order, and then the company will remit the original cost and commission to him.

After expressing his interest in the part-time job, he was instructed to send money to a personal bank account named “Anderson Anak XXXX” when paying for the goods.

Pang said he made a total of eight transactions.

He suspected something was amiss when the other party said that he needed to complete a ‘repurchase’ task.

Pang said sadly that he had never posted or commented on any posts for so long after he joined the Facebook group.

But now, he wants to share his experience so that others will not fall victim.

Many people out there experienced the same nightmare as Pang, as such frauds are on the rise and had been ongoing for some time.

Pang advised people not to be greedy, adding that it’s best to earn money by putting in an honest day’s work.