In the incident at around 7.15 am, Shahriza Ishak, 39, died at the scene due to severe head injuries. 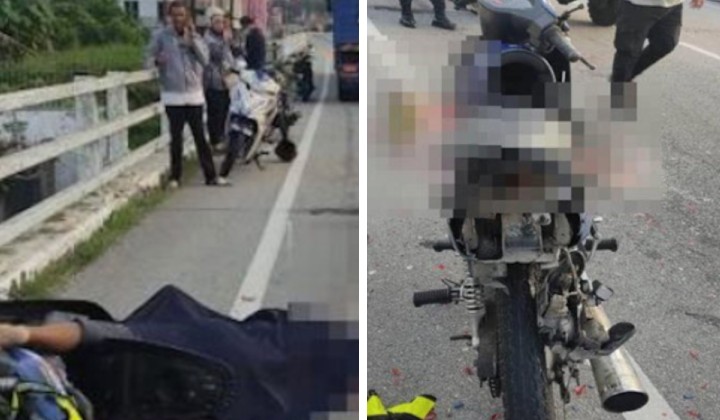 A woman tragically died after sending her son to school when the motorcycle she was riding was dragged by a trailer for 10 meters at KM 57, Jalan Ipoh-Kuala Lumpur, Tapah today (12 August).

According to a report by Utusan Malaysia, the incident happened at about 7.15 am on the Sungai Batang Padang bridge.

The victim, Shahriza Ishak, 39, was seriously injured in the head after being dragged by a heavy vehicle.

Tapah district police chief Wan Azharuddin Wan Ismail said the victim, riding a Honda Wave type motorcycle, was going home to pick up her other child to be sent to school.

He explained that the accident happened when the woman’s motorcycle collided with the trailer.

It caused the victim to fall on the road, and was pronounced dead at the scene.

A urine screening test found the 36-year-old trailer driver positive for methamphetamine, and the man was detained for further investigation.

In the meantime, the vehicle involved in the accident was detained for inspection by Puspakom.

Further investigation was carried out per Section 41(1) of the Road Transport Act 1987.

The victim left behind a husband and four children.