Their luggages were missing from the start of the trip and only showed up after they came home. 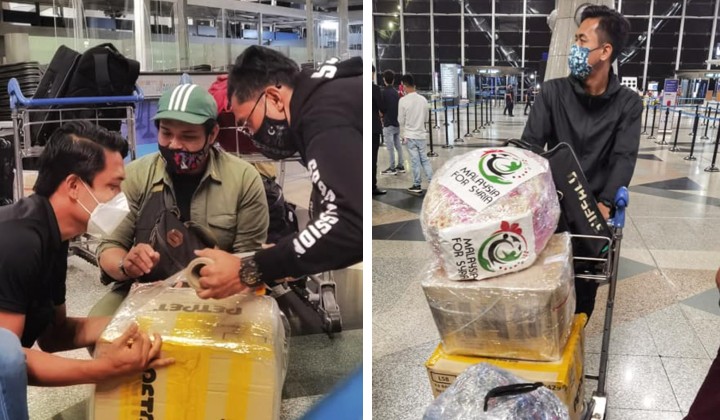 The odds are slim that your airline will lose your luggage, but they might forget to put it on the flight or misplace the luggage.

In the case of Salman Mohd Yusop and his co-workers from Global Peace Mission, they only got their bags after a two-week humanitarian mission to Syria.

Their ordeal began when they landed in Istanbul, Turkey, in early July after flying from Kuala Lumpur.

The group waited more than four hours at the baggage carousels before filing a passenger irregularity report with the airline’s representatives.

The airline informed them that their eight pieces of baggage were left behind in Singapore’s Changi Airport, where they transited.

Speaking to TRP, Salman said they were promised the missing baggage would arrive in about two days.

Only one of our checked-in items arrive. We have no clothes, toiletries and items to be used for our trip. We have to spend on those items before continuing the journey to war-torn Syria.

Humanitarian worker Salman Mohd Yusop on the consequence of the airline forgetting their luggages.

He and his group had arrived in Istanbul on a flag carrier of the United Arab Emirates (UAE) that is certified as a 4-Star Airline.

The connecting flight from Kuala Lumpur was via a code-sharing flight operated by an Australian low-cost airline.

Two days later, they followed up with the airlines, but still, the bag failed to arrive.

The group continued to contact and write to the airlines daily for the rest of their trip.

Finally, on the day of departure back to Kuala Lumpur, one of the missing bags arrived at the Istanbul airport just hours before they flew back.

The remaining pieces of baggage finally arrived back in Kuala Lumpur a few days after they returned home.

Salman expressed regret that neither airline compensated them in any way, despite the promise that the pieces of luggage would arrive in two days.

The airlines just keep passing the blame to each other. At the end of it, we were mentally drained by the push-around.

Humanitarian worker Salman Mohd Yusop on the airlines dusting off their responsibility.

Most comprehensive travel insurance policies include coverage for theft, loss or damage of your luggage and personal effects in various circumstances.

These include belongings that are lost, stolen or damaged whilst they are accompanying you on your trip.

Salman said his entire group, except one person, had bought travel insurance before their flight, especially since they were travelling to conflict zones.

He said they would also try to claim for the expenses incurred directly from the missing luggage, including the money spent on buying new clothes.

Complaints can also be made to the Malaysian Aviation Commission (MAVCOM), including on foreign airlines, as long as the complaint relates to its operations in Malaysia.

Turkish Airlines lost my baggage which contained many memorable things, now they think 600USD, after a more than one month delay, will compensate…
My advice: never choose this airline even if you have to pay more#turkishairlines

READ MORE: Why I Will Never Fly MAS Again [Opinion]