Netizens feel sorry for the boy who pleaded with the hawker to stop destroying his family’s business. 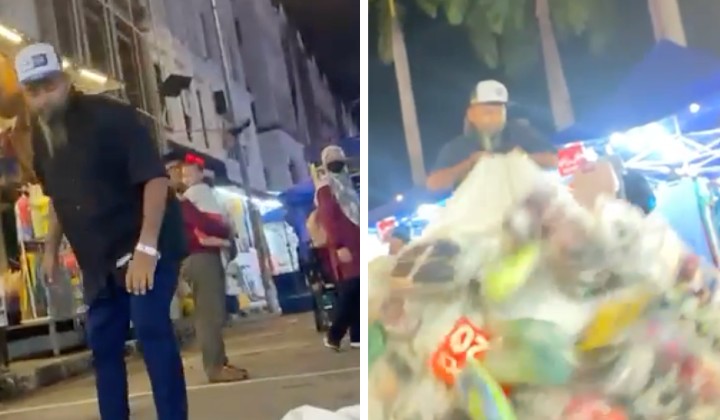 Bullying is never acceptable in a society where everyone is entitled to respectful treatment.

Recently, an incident at a pasar malam went viral in which an egotistical and hostile trader thrashed up the stall belonging to a family.

The incident happened at Pahlawan Walk in Melaka.

In the video, a boy’s voice can be heard in the background as the man kicks around the shoes sold by the family.

The boy and his family were shocked by what was happening and asked the aggressor why he was ‘destroying’ their stall.

An Eye For An Eye

While making a commotion at the night market, the man claimed that the boy’s father had started a fight that almost caused his men to die.

Because he was angry with what had happened to his men, it was ‘retribution’ for the boy’s father.

Meanwhile, netizens criticised the act of bullying and said such behaviours would have consequences, and rightly so.

We won’t always like or agree with everyone we meet, but we must respect each other.

Netizens said that no matter the reason, the trader has no right to disrupt someone’s livelihood.

In addition, the boy looking after his family’s stall did not know anything about what happened between the man and his father.

Netizens said the man should deal directly with the father and not take it out on a helpless boy.

It is understood that the family had lodged a police report on the incident.

The incident was due to the family putting some chairs in front of a shop. The chairs were meant for customers to sit while trying out shoes.

According to the report, the shopkeeper was unhappy as it blocked customers from entering his premise.

The family also claimed that the aggressor was the uncle of the shopkeeper.