According to Rapid Penang, a police report regarding the incident has been made at the Northeast Regional Traffic Police Office. 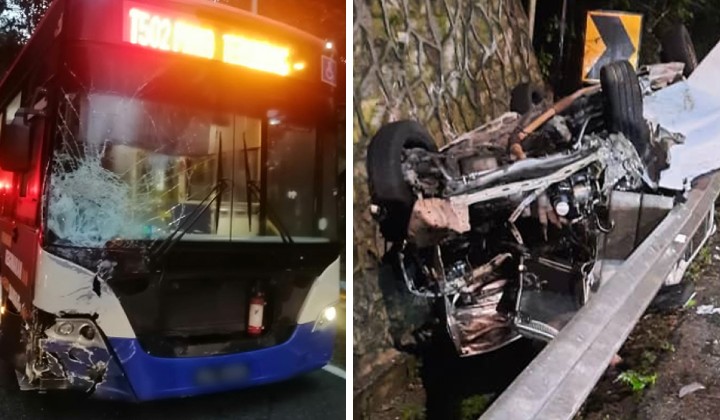 A Rapid Penang bus was involved in an accident with a car and motorcycle.

The bus captain and passengers were reported safe after the accident in Jalan Tun Sardon, Penang.

According to an official statement by Rapid Penang, the incident occurred at 6.41 am.

The collision involved a white Perodua Kenari car driven by a man and a woman that collided with the front of the Rapid Penang bus route T502.

At the time, a motorcycle behind Kenari’s car was also involved in the accident.

A video recording of the incident went viral, which puts the bus driver at fault.

However, the explanation issued by Rapid Penang invited the public’s dissatisfaction.

Based on the viral video, netizens say that is clear that the Rapid Penang bus swerved into the opposite lane, which resulted in a collision with the two other road users.

In the meantime, a friend of the victim’s sister, who riding the motorcycle, shared through TikTok that she was conscious but suffered several serious injuries.

The victim’s lungs and liver are said to be damaged, while the neck was broken.

The head was bleeding but not dangerous, and the victim received treatment in the ICU.

The condition of the victims in the Perodua Kenari was uncertain, but based on the pictures in the TikTok video, the car involved was severely damaged due to the collision.