The man threw all three kids from the top of the highway before jumping himself. 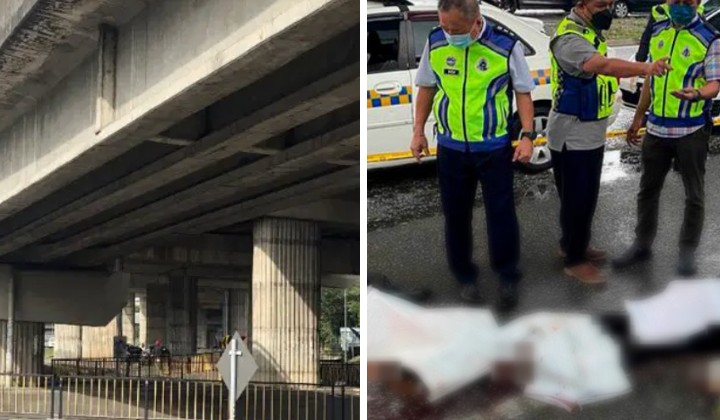 Two Myanmar brothers died, while the other was seriously injured after being thrown by their father from about 20 meters at Middle Ring Road 2 (MRR2) near Kepong.

In the 5.50 am incident, the public realized something was amiss when they saw the 38-year-old man carrying a young boy in a suspicious condition.

The man was also seen with two other children on the spot.

He said the suspect, the father of three children, died after jumping from the exact location.

When ordinary people tried to approach the man, he threw the three children off MRR2, from a height of about 20 meters before jumping himself.

Beh said the man and two children died on the spot, while a third child, estimated to be five years old, survived.

He was seriously injured and rushed to Selayang Hospital for treatment.

The medical officer’s examination found that the boy who survived had internal injuries to his stomach and a fracture to his left rib.

The victim is now being treated in the ICU.

On the two children who died, police said they are an eight-year-old girl and a boy estimated to be between six and seven years old.

All the victims are believed to be from Myanmar as they were carrying identification cards from United Nations High Commissioner for Refugees (UNHCR).

All the bodies were sent to the Forensic Unit of the Kuala Lumpur Hospital for post-mortem.

Eng Lai said that efforts to identify the identities and ages of all the victims and suspects were being carried out.

Police also asked for the cooperation of the public who had information to help with the investigation.

Those who have information regarding the incident may contact the case strategy officer, Assistant Superintendent and Baldev Singh Gurdial Singh on line 012-4806062 or the Sentul Regional Police Officers Movement Unit (IPD) on line 03-40482222.