Mustafa offers to help anyone being harassed by ah longs. 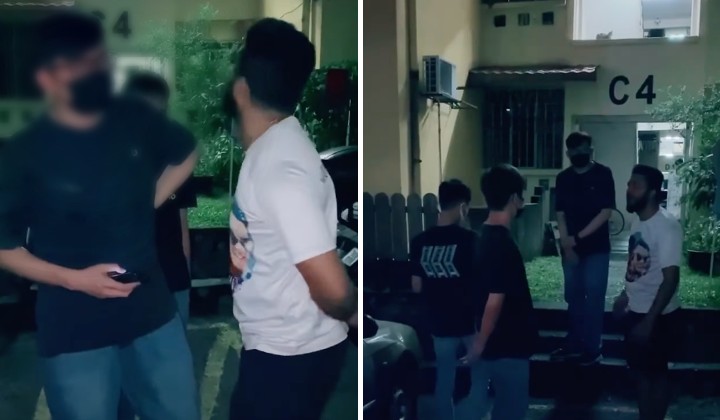 Loan sharks are called ‘loan sharks’ because they are like sharks; aggressive, angry, and greedy.

They can do many illegal things just to repay, like vandalising or kidnapping.

As unlicensed moneylenders, they often target families on low incomes or those who find themselves in difficult times.

But intimidating as they are, loan sharks can also understand the meaning of fear.

Recently, a video went viral in which a man berated three young men believed to be loan sharks.

What is surprising is how the loan sharks responded. They did nothing and just stood there as the man gave them a good tongue lashing.

The video was shared by a man named Mustafa Khan through his TikTok account, showing him scolding the three young men.

The three youths are said to be in a residential area to collect money from their victims.

In his video, Mustafa said he did not like how the ah longs asked for money at night when the borrower was with his family.

He also said this is not the first time he has dealt with ah longs and told the three young men involved to go home.

According to him, there are among the victims who only borrowed RM400 but have to pay back up to thousands of ringgit because the debt has not yet been settled.

Mustafa said the public could contact him on his official Instagram profile if they need help to deal with ah longs.

Netizens were amazed by Mustafa’s bravery; many had never seen ah longs who were silent and afraid of the public.

Some said that the three ah longs did not have the usual characteristics of ah longs or movie gangsters.

At the same time, people are reminded that loan sharks should never be the answer to one’s financial needs.

Apart from the fact that loan sharks are illegal, people should know that it is often impossible to repay the debt to a loan shark.

It is a well-known fact that many borrowers and their loved ones endured a lot of harassment and misery.

allowing loan sharks to operate is the lowest thing someone can do did someone accidentally ate cibai is it you don't play with ah long they will rob whatever future you have https://t.co/T2w3GgK8AN