Rohana is the first in a program fully sponsored by Yayasan Tun Chancellor for less fortunate students. 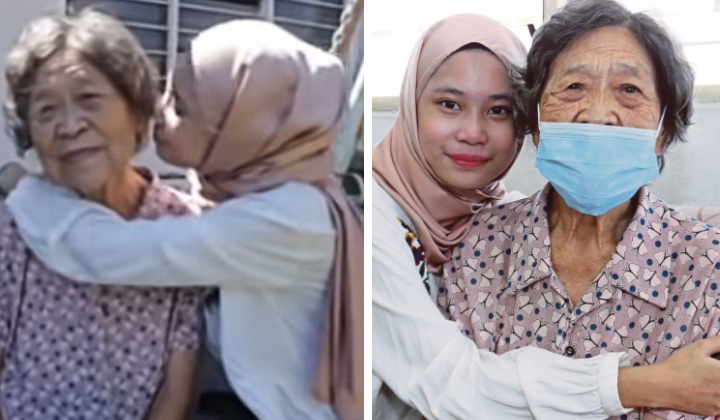 A former stateless child whose story went viral received the opportunity to study for a Diploma in Computer Science from the Universiti Teknikal Malaysia Melaka (UTeM) today.

She received her citizenship after her life story went viral through social media and caught the attention of Prime Minister Datuk Seri Ismail Sabri Yaakob.

Rohana, who was looked after by a former Chinese teacher, Chee Hoi Lan, said she was very grateful for the opportunity she had been given.

She promised to work hard to finish her studies excellently to contribute to the local community.

I don’t know how to say thank you, I’m very grateful for the gift God has given me because this is something I’ve dreamed of for a long time. Thank you also to UTEM. Although I am more interested in the field of medicine, Computer Science is my second choice and ‘laoshi’ (Chee) also supports it.

She will leave with Chee to Malacca tomorrow because the registration for admission to the UTeM program is on Monday.

She was still preparing because she was only informed about the offer before it was confirmed on Saturday.

There are some essential items not yet purchased, and I am also looking for a maid who can take care of laoshi (Chee) during my absence.

Former stateless child Rohana Abdullah on her peprarations to study at UTeM.

Rohana said Chee often cries at the thought that they will be apart, so it would be better if someone would accompany her occasionally at home while waiting for Rohana’s return at the weekend.

Meanwhile, Chee said this is the first time he will be away from Rohana and hopes the girl can take good care of herself throughout her studies.

I hope he (Rohana) doesn’t forget me. If you have free time, come back here and see me. When she finishes studying, I hope she can become an Internet (information technology) expert.

In the meantime, Massila said Rohana was one of the three individuals selected to follow the pilot project of the UTeM’s Golden Child Program that had just started.

The program gives excellent students from less fortunate families the opportunity to continue their studies at UTeM, with the funding cost entirely borne by Yayasan Tun Chancellor.

She meets the desired characteristics of the needy group, such as being a single child from the B40 group and has excellent Sijil Pelajaran Malaysia (SPM) exam results.

Rohana’s story went viral because she was raised by Chee when she was two months old after being abandoned by her biological mother in Indonesia.

She had difficulties getting her citizenship, and the government only looked into it after her situation became viral.

After many hurdles, Rohana was one of 34 recipients aged between five and 24 who received Malaysian citizenship at a ceremony held at the Home Ministry in April.

LFL today questioned the home minister’s recent statement that a thorough investigation is needed before Rohana Abdullah can be declared a citizen, saying she is one by right and should not have been categorised as stateless by his ministry to begin with.

Celebrating The Year Of The Rabbit With Oversea Restaurant