Netizens said the product name itself is misleading consumers. 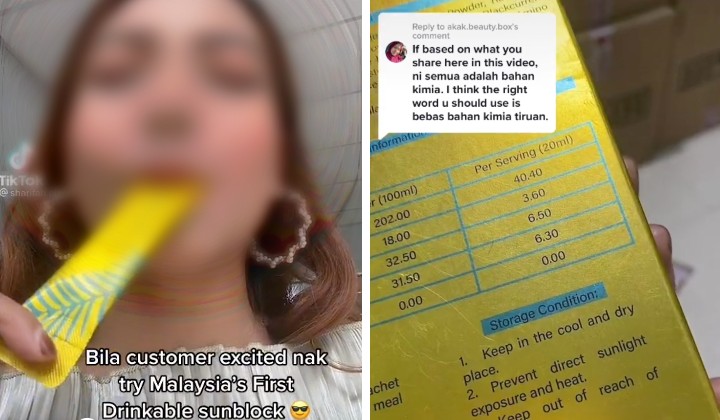 Recently, there has been a lot of talk on TikTok and Twitter applications about a drinkable sunblock.

In the video, a woman believed to be the product’s founder promotes a drink claimed to be ‘drinkable sunblock’.

It is touted that users no longer need to apply sunscreen if they drink the product.

The supposed benefits of the product had drawn various responses from netizens who criticized the ‘drinkable sunblock’.

Several doctors were also seen giving their responses about the drink through TikTok.

Despite receiving significant criticism, the woman still tried to ‘teach’ netizens about the product’s benefits by showing the ingredients used.

The Difference Between Sunscreens And Antioxidants

However, some said she might be confused with the antioxidant ingredient, which works more as a ‘whitening product’ instead of a ‘sunblock’.

After consuming the drink, the woman claimed her skin was not ‘sunburned’ and bright as usual.

But netizens said it is not because the product involved is effective as a ‘sunblock’.

Instead, the woman’s skin became brighter because the ingredients were the same as a ‘whitening product’.

In addition, many were also surprised by the sugar content in the drink product.

They said the product will not only not protect the skin from UV rays but will also damage the kidneys.

The product founder said that the product is the result of two years’ research, but consumers remain sceptical.

A New Form Of Skin Protection?

Globally, drinkable sunscreen products have been around for some time.

The idea is that one could protect from the inside out instead of having to coat oneself in a cream that blocks the sun.

Studies have shown that eating or drinking certain compounds, including tomato paste and green tea, can give you some protection from burning.

Some people dah faham where Sunlove Drinkable Sunblock comes from. But most of Malaysians tak faham lagi sebab they are not aware how badly the sun can damage our skin. Kat US numbers of skin cancer patients rising tahu tak and it’s bad.

Some drinkable sunblock products in the market contain antioxidants such as lycopene, found in tomatoes, and polypodium leucotomos, a fern extract, which have some UV protecting effects.

In any case, the expert advice on maintaining good skin has remained the same – wear sunscreen liberally and a hat for added protection.