The subsequent apology had not been well-received by some who considered it insufficient. 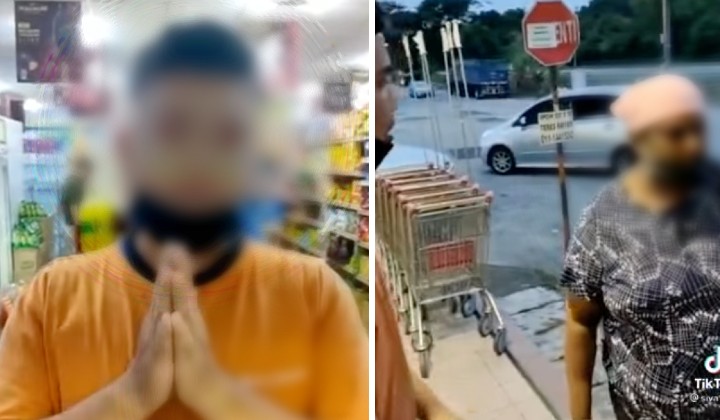 A young mini market worker apologised to customers after uttering the word ‘pariah’.

The incident was said to happen recently in Menglembu, Perak.

The awkward moment was captured on video and shared on social media.

In the video, a man berated the mini market worker for uttering the word against his mother, who is said to be sick.

The young man was said to have said the P-word when the man’s mother asked him to help look for some products in the outlet.

He continued apologising even as the man’s mother, an elderly woman, came up and scolded him.

She told him to respect the customers and provide better services.

At the same time, the man also berated other employees at the mini market as they did nothing to correct their colleague.

This Was Always Going To Happen

The use of the P-word prompted widespread criticism.

Netizens said the mini market worker should not have uttered words for which he did not understand the meaning.

Some said the man and his mother could have corrected the mini market worker more gently without raising their voice.

However, others said the anger is understandable as the P-word is insulting and deeply distressing.

People also feel it is a total shame that it had taken a severe rebuke to trigger an apology from the mini market worker.

Why It’s Not Okay To Say The Word

The P-word is often used as derogatory and insulting terms with casteist prejudice.

In its broadest sense, the term indicates an outcast, one that is despised or rejected.

Originally derived from Tamil paṛaiyar, it used to refer to the Paraiyan, a Tamil caste group of labourers and village servants of low status.

The meaning was extended to embrace many groups outside the so-called clean caste groups, with varying degrees of status.

In English, the word has more than one meaning and definition which are not associated with the Indian caste system.

The word has created much debate and controversy, especially in a multiracial society like Malaysia.

And there has been considerable internal debate raised by the people.

PARIAH yes its demeaning, similar to NEGRO or NIGGER in USA referring to the black slaves.
But KELING?
Do you know us melayu kampong called the indians (from south india) who were brought in by British to tap rubber and to work in rail construction as Keling, with no malice.

Malaysians had been urged not to overreact but to be rational and understand the context in which the word is used.

In any case, most Malaysians who are aware of the situation would try their best to avoid using the P-word and avoid hurting the feelings of others.

None had been spared for uttering the word, including former prime minister Tun Dr Mahathir Mohamad.

Despite Dr Mahathir’s explanation, the P-word has created distress amongst many people.

Several Kapar PKR members led by V Maneyvannan lodged a police report last night against Prime Minister Dr Mahathir Mohamad for using the word “pariah”, when commenting on Lynas Corporation.alleging the use of the word had hurt the feelings of the Indian community

Human rights activist Sashi Kumar said the latest incident reflects the nation’s education in regards to tolerance and respect towards other races and religions.

He regrets that actions are not equally taken against all who deliberately attack other races and insult their religions.

Words like ‘pariah’ and ‘pendatang’ is rampantly used nowadays and its the politicians who started it. Now it has become as though it’s ok to insult others in such manner.

Human rights activist Sashi Kumar to TRP on why racial slurs had been taken lightly.