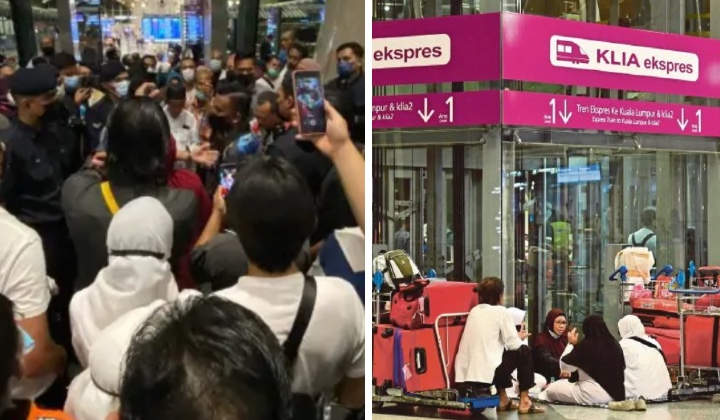 A travel agency that handled nearly 400 prospective pilgrims stranded at the Kuala Lumpur International Airport (KLIA) will return the pilgrims’ money and passports in stages.

In a statement today, the Ministry of Tourism, Arts and Culture (MOTAC) informed that the agency is licensed.

MOTAC enforcement team interviewed company representatives at KLIA and was assured that money and passports would be returned if prospective pilgrims did not get flights as scheduled.

If the victims do not get back the promised money, they are advised to lodge a police report.

They can do so at the KLIA Main Terminal Building (MTB) Police Station or any nearby police station, according to MOTAC.

Victims are also asked to make a formal complaint to MOTAC through the Public Complaints Management System (SISPAA), MOTAC.

The complaint can be lodged at the link https://motac.spab.gov.my and the Malaysian Consumer Claims Tribunal (TTPM) at https://ttpm.kpdnhep.gov .my/portal/home.

Meanwhile, police have confirmed the arrest of five individuals suspected of being involved in the case.

This case will be investigated according to Section 420 of the Penal Code for cheating, and so far, there have been 23 police reports made.

The Saudi Arabian Embassy in Kuala Lumpur has expressed regret over the news of about 380 prospective Malaysian pilgrims stranded at the Kuala Lumpur International Airport (KLIA).

According to a statement provided to Bernama, the embassy insisted that it had nothing to do with the incident.

The embassy regrets what happened to some Malaysians deceived by the Malaysian travel agency who claimed to have obtained visas from the embassy.

The statement said the embassy insisted it had nothing to do with this incident.

The statement also referred to a previous statement issued on 24 March, and the embassy found that there were advertisements by several Malaysian companies promoting tourism packages and pilgrimage programs this year.

It also warned and stressed that the embassy did not communicate with any party in Malaysia in terms of the arrangements for this year’s hajj.

This case is not the first, and there have been many cases before where hundreds of pilgrims were stranded. An investigation needs to be done to identify how this case could have happened.

Mapim also called for the government’s SOP, which imposes the current procedure for pilgrimage management companies, to be revised so that it can be simplified.

He said it is helpful for those who do not want to wait for their haj, which may take many years due to the limited quota for each country, i.e. 1% of the Muslim population.

However, the furada is a lucrative business, and clients are willing to pay a high price.

When the travel agency loses the visa allocation due to the limitation of numbers and being outbid, potential haj pilgrims can be stranded in the case of the 400.

I would congratulate the Ministry of Culture and Tourism for their quick action to get refunds for those stranded. What is essential is for proper coordination of the furada allocation in the future.

ACCIN chief executive officer Jamal Shamsudin on the inconvenience and disappointment faced by the pilgrims.