The K9 dog lived to an equivalent of 91 years old for humans. 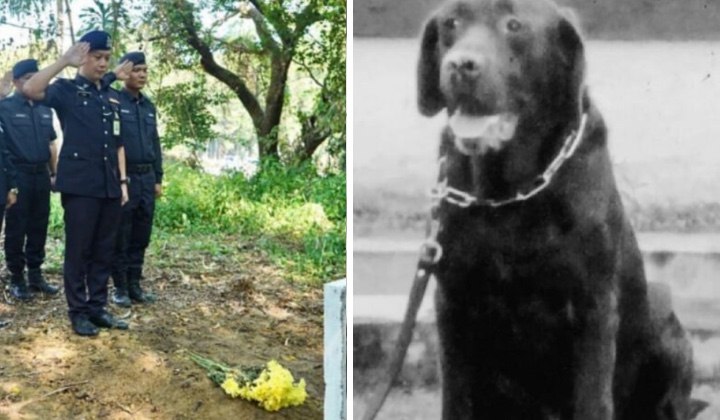 Police from the Pahang Contingent Police Headquarters (IPK) paid their last respects to the police dog, BAD, a canine that has done much for the country.

Through a post on Facebook, police from the Pahang Contingent Criminal Investigation Department (JSJ) said BAD, a labrador, breathed his last at 3 pm on Monday after fighting for his life due to old age.

According to him, BAD is a K9 JSJ IPK Pahang dog that is 13 years and eight months old (equivalent to a human being of 91) and has been doing devotional service since 4 August 2011.

Police added that throughout his service BAD managed to produce two significant successes in defeating drug syndicates in 2012 and 2014 with his skills.

Appreciating The Services And Devotion Of BAD

BAD was buried next to his comrade-in-arms THO, who had passed away on September 19, 2020.

He added that BAD’s services and devotion would remain as a contribution to the beloved country.

Is The Labrador A Good Family Dog?

Labradors make excellent companions, as well as assistance dogs due to their sensitive and affectionate nature.

Labradors are friendly, calm, and extremely trainable, often chosen by the authorities as detection dogs.

Labradors also do well with both sole owners or as a part of a family and get on well with children and other pets.

Originally bred to sniff out felled birds during hunting, they’re having a blast running around.

Labradors get this creepy low-butt-to-the-ground posture as they sprint like maniacs.

Their ears flip inside out, and they look pretty ridiculous. They also are lazy when they sit down.

Good night, lovely people and lovely dogs!!
I hope that you've had a fab Tuesday.
It looks like we are set for some days of super hot (for here) weather so there will be lots of late walks and lazy days happening.
Sleep well and sweet dreams. #hoorayfordogs #labrador pic.twitter.com/XfvUX2KvAF