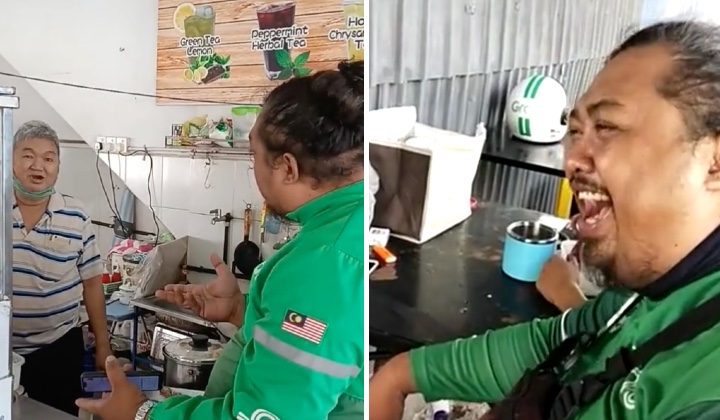 Having the skills to speak multiple languages ​​has always been a bonus.

Lately, a non-Chinese Grab rider has been drawing attention with his ability to speak the language.

People are amused because he speaks fluently and confidently, although it’s actually hard to tell if he says it in Mandarin or other Chinese dialects.

In a another video posted on TikTok, the Grab rider was seen walking to a kopitiam before ordering food with a Chinese hawker.

He starts to speaks with the fluency of a native speaker, although it was hard to make out what he was saying.

It is probable that he is speaking in a local dialect which only Sarawakians could understand.

It is not the first time that the Grab rider caught attention with his linguistic prowess.

One time, he was speaking Chinese while at a motorcycle workshop.

A Chinese man did not seem to understand what he was trying to convey, and could laugh with his friend in amazement.

Do Most Malaysians Speak Chinese?

Non-native Chinese dialect speakers in Malaysia are few and far in between, while Mandarin speakers are much more common as it is taught in schools.

Chinese language varieties, including both Mandarin and dialects such as Cantonese, Hakka, and Hokkien, are widely spoken in Malaysia, where the Chinese diaspora constitutes around 24.6 per cent of the total population.

Most of them are found on the west coast of Peninsular Malaysia, the most urbanized part of the country, as well as in the major cities and towns of Sabah and Sarawak.

Malaysian Mandarin’s phonology is closer to the Mandarin accents of Southern China than the Beijing standard pronunciation due to the influence of other dialects such as Cantonese and Hokkien.

Celebrating The Year Of The Rabbit With Oversea Restaurant