The durian buffet costs about RM88 per person. 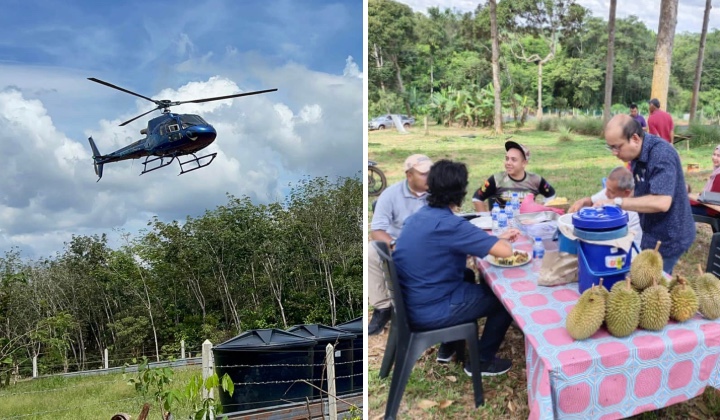 Malaysians are prepared to travel if the right food lay at the other end.

But how far would Malaysians go for good durian?

For a Datuk businessman and his friends, a journey from Kuala Lumpur to a durian farm in Segamat via helicopter is no problem.

The businessman booked a durian buffet for four people with Segamat durian farmer Roman Harkin to taste the local varieties of durians specifically.

Roman’s durian farm in Kampung Bangas covers an area of about 3 acres.

The businessman landed at the durian farm by helicopter at 2 pm last Wednesday as scheduled.

Roman, who shared the experience on Facebook, pointed out that the businessman was from Kuala Lumpur and contacted him through an assistant.

The businessman often gets to eat popular durians like Musang King, but rarely have the opportunity to taste those from Segamat, so he booked a durian buffet to share with friends.

He revealed that this was also the first time he received a VIP by helicopter.

He contacted the helicopter pilot many times before the booking date to ensure that everything went smoothly.

Also, he set an open place as the landing point at the durian garden.

Roman said that the businessman and his friends feasted at the durian farm.

They ate five durians and took 20 back to Kuala Lumpur to share with their relatives and friends.

In addition to authentic durians, Roman treated them to mangosteen and rambutan from his farm.

The businessman also asked Roman to cook some catfish which is popular in Segamat.

Helicopters Are A Favourite With Politicians

In Malaysia, helicopters are widely used by ministers and politicians.

Their helicopters jaunts had often been criticised by the public due to the cost involved.

Many Malaysian politicians too have landed their helicopters at the football field, When Najib held a wedding reception in pekan, the Helicopter carrying Jamaludin too landed in a football field to pick up other politicians. https://t.co/eFiKqSLwYE

The public said helicopters should be prioritised for emergency needs such as transportation for rescue and delivery of aid.

But then we have some Dato Seri and all who own helicopters which they will only use to bring Nasi Ganja and not help #banjir victims https://t.co/YoYQpCacum pic.twitter.com/stqiSJvR6o

Helicopters are used by media personnel, oil & gas industry workers, the police and, of course, by the military.

This is #Malaysia. The rakyat still have to suffer walking 18 hrs to attend scholl. Infrastructure, road way is still bad in Sabah. @IsmailSabri60 help them please. A helicopter to assist them? @HishammuddinH2O pic.twitter.com/NsEmeGvwGT

According to an Asian Sky Media report, there are 136 helicopters in Malaysia, with 71 Airbus-made helicopters.

It accounts for 3% of the total number of helicopters available in the Asia Pacific region.

The popular models used in Malaysia are Airbus, Agusta, Eurocopter, Aerospatiale and Robinson.

READ MORE: You Can’t Fly Drones Or Helicopters In Taman Negara, Here’s Why

No Robbery Or Fire Incident At Genting Highlands, Police Says