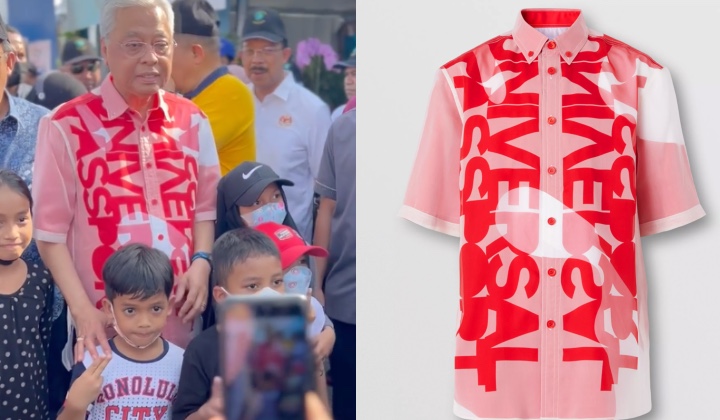 Social media are abuzz with the clothing worn by Prime Minister Datuk Seri Ismail Sabri Yaakob when he visited a carnival in Putrajaya last weekend.

Netizens are raving about his red shirt from British luxury brand Burberry, which costs about RM6,900 a piece.

In a video that has gone viral, Ismail Sabri was mingling with the people at the carnival while wearing the shirt.

Not The Time To Flaunt, Said Netizens

Netizens on social media gave a mostly negative reaction when they compared the price of the shirt worn with the salary scale of most people at this time.

Many said that the people are now stuck with the country’s deteriorating economic situation, but the Prime Minister is being fashionable in an expensive shirt.

It is said that the price is as expensive as three months’ salary for Malaysians.

On the right : A man barely makes RM10 a day

Some question the meaning of ‘Keluarga Malaysia’ (Malaysian Family) introduced by Ismail Sabri, which is often lauded but seemingly fails to assist those in need.

The Keluarga Malaysia concept calls on the people to put aside all differences and together mobilise their energy in facing challenges as a family.

Last May, a Burberry shirt was also worn by Ismail Sabri Yaakob during a meeting with Singapore prime minister Lee Hsien Loong, and it became the talk of social media users.

According to the Burberry Malaysia website, the black, blue and white patterned shirt costs RM5,500.

But some praised Ismail Sabri and hoped he could continue the effort to make the country great again.

Granted, it’s not the first time netizens have voiced out against elected representatives from flaunting their wealth.

Perhaps, the prime minister and other politicians could learned a thing or two from former premier Tun Dr Mahathir Mohamad.