The kindergarten teacher is asking for advice if the low pay is normal in market. 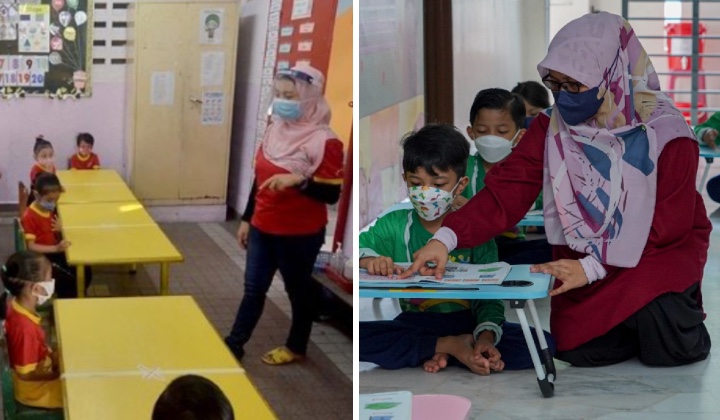 The career of a teacher is undeniably always highly regarded.

If the issue of salary is discussed, are the wages for a teacher in Malaysia worth it or otherwise?

Some teachers in Malaysia must work second jobs to live comfortably.

The tweet featured a screenshot of the sharing from a kindergarten teacher, which has caught the public’s attention.

Through the sharing, a teacher asked if it was still normal to earn RM450 a month in today’s economy.

In fact, the teacher works as a kindergarten teacher in an Islamic kindergarten but refused to reveal the name of the centre.

The teacher has to work from 7.30 am to 1 noon with 19 students with a high target for academics, memorizing surahs (chapters) and hadith (collected accounts of the sayings, actions and habits of the Prophet Muhammad).

She also had to prepare food and take care of students with autism, while the employer is only around at times but never helps out.

The kindergarten teacher’s colleague has been working for almost 10 years but still earns RM500.

However, they both do not have the courage and channel to voice about the salary.

On social media, the public condemned the teacher’s employer and asked for the kindergarten to be reported to the labor office.

Sadly, it appears that such sad cases of low pay are not uncommon.

On the other hand, parents said they pay as much as RM570 per child.

They had hoped that such huge amount would contribute towards a decent salary for the teachers.

Others said the low pay had contributed to a decline in the national education system.

There is a major brain drain issue in Malaysia. In old days teachers were passionate in educating students and disciplined us so that we succeed. These days education system is so screwed that teachers with the salary they get,have no interest nor passion their predecessors had

Teachers’ salaries in Malaysia reportedly have a minimum salary starting at RM2,188 with a salary increase rate of RM225 per year.

It is estimated to start at RM26,256 a year, although the numbers can vary.

This is literally higher than a teacher's salary 😭 The average salary for a Kindergarten Teacher is RM1,333 per month in Malaysia, maybe I should just give up on that dream 💔 https://t.co/Z93sutfjQp

According to a research, a person working in teaching industry in Malaysia typically earns around an average of RM6,990 per month.

In the employment market, it is common to find jobs that pay more than teachers on the lower end of the income range.

The average monthly salary includes housing, transport, and other benefits.

The average income of teachers in Malaysia is in contrast to regional trends, where average teachers’ pay has been increasing.

Sen @WinGatchalian74: The average annual teachers’ salary in the Philippines, inclusive of benefits, is $18,160 while the ASEAN average is at $27,742. Brunei currently tops the list with an annual teacher salary of $55,263, while Vietnam is at the bottom with $3,877.