There was no damage to public property and the fire was brought under control. 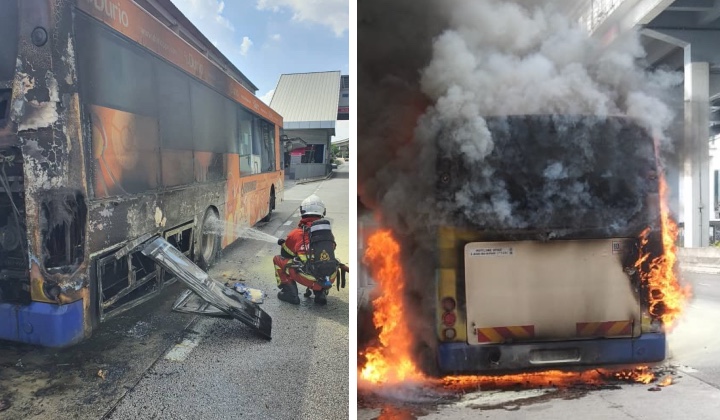 On Tuesday, a bus belonging to Rapid KL was burnt in a fire incident at the SS15 LRT Station.

Rapid KL, through a post on Twitter, informed that the fire occurred at about 3 pm involving a bus route 771 from Desa Mentari to Subang Mewah USJ 1.

It said the incident happened when the bus wanted to pick up passengers at the SS15 LRT Station.

There was a passenger in the bus. The passenger and the bus captain were not injured. There was also no damage to public property, and the fire was brought under control.

Rapid KL commenting on the incident.

Rapid KL also pledged to provide full cooperation with the police to investigate the incident.

The public transportation company added that the incident will be taken seriously.

The cause of the fire is still under investigation.

Rapid KL is owned by Prasarana Malaysia and operated by its subsidiaries Rapid Rail and Rapid Bus.

This is not the first time that a RapidKL had went up in flames. In March 2021, a RapidKL caught fire and burned up in Taman Bunga Raya in Kuala Lumpur.

Thankfully, there were no loss of life.

READ MORE: KTMB CEO Gets Challenged To Ride The KTM After Blaming Citizens For Not Using Public Transport

A Culture Of Incompetence

It is ironic that on one hand, we are encouraged to take public transportation to help ease traffic on the roads.

And yet on the other, public transport has become a less and less attractive commute option for passengers, not that it was excellent to begin with.

The latest incident came in the wake of a jump in complaints against public transport operators.

LRT and KTM accounted for most of the complaints, given the spate of service disruptions and accidents.

READ MORE: KTMB CEO Gets Challenged To Ride The KTM After Blaming Citizens For Not Using Public Transport

One of the most pressing challenges facing public transportation today is the “First and Last Mile Problem”, which is the distance a commuter needs to travel from a transit stop to their destination, or vice versa.

At Setapak too, rapidKL bus frequency used to be every 20 minutes, now need to wait for at least 40 minutes

The public said if the government is serious about improving traffic conditions on the roads and air quality, it must do more.

Some said the government should mount an investigation and penalise the offending transportation companies if the complaints are justified.

Then they blame rakyat for not utilising public transport when your service is like piece of shit. Especially bus service run by RapidKL. One reason because one entity control and monopolize the whole public transport. https://t.co/L2hHUzhlJB

At the very least, it must ensure that the public transportation system is safe, efficient, clean and quiet.

The continual stream of complaints reflects badly on the government, as if passengers’ feedback are never taken seriously.