This premium gin has been awarded gold four times and was voted twice as the best Gin in the Netherlands. 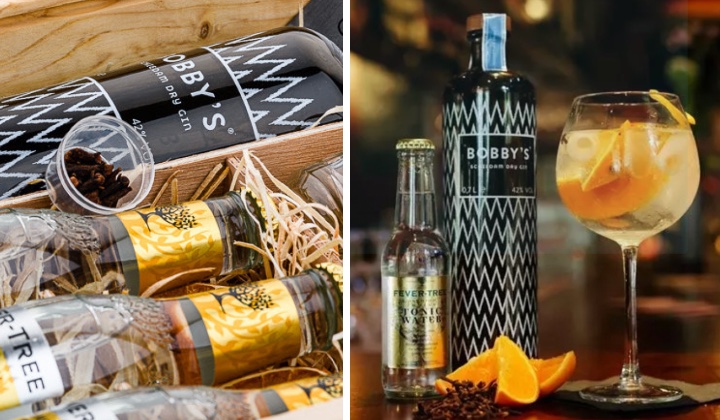 The gin is a premium quality product from the Netherlands that combines the flavors of Eastern Indonesia.

The recipe for Bobby’s Dry Gin has been passed down from generation to generation, which means that this drink has its own distinct taste.

In addition to taste, the blend of two cultures is also manifested through the bottle packaging.

The bottle is printed with Ikat (a method for colouring fabric in patterns), the original weaving pattern of Indonesia, and combined with the bottle shape of a classic genever bottle called the ‘kruik’.

With a design that represents a strong and modern interpretation of its shape – this grey, brown-smoked bottle is hard to miss.

Bobby’s Schiedam Dry Gin is named after Jacobus Alfons, known to his friends and family as Bob or Bobby.

From the grandfather’s recipe, they combine the typical gin plants, namely juniperand rose hips with Indonesian spices such as cloves, lemon grass, and pepper cubes, which in the end was able to combine the flavors of East and West.

Touted as the leading premium gin of the Netherlands, it is globally available in more than 50 countries.

Bobby’s Schiedam Dry Gin has been awarded with gold four times and voted the best gin of the Netherlands twice by industry and consumer panels.

With a fresh burst of lemongrass on the nose and the warmth of cinnamon and cloves on the first sip, it’s a unique expression of the east flavours in Bobby’s gin, combined with the western botanicals marry perfectly with a premium Indian tonic.

Jim Prins, Bobby’s co-founder and owner on the recipe inspired by the creator’s grandfather, Bobby Alfons.

Absolute Perfection In A Glass

Also present was Brand Ambassador – Stephen Arijono Busman, a former mixologist at The Stockroom, in the Dutch city of Groningen, which was awarded Best Cocktail Bar of the Netherlands in 2019.

The award winning gin only uses organic ingredients to create its characteristic scent and taste.

Botanicals such as juniper, fennel and rose hips make Bobby’s a Schiedam Dry Gin and create the balance between East and West.

Mixologist Stephen Arijono Busman on Bobby’s Schiedam Dry Gin being the best of both worlds, east and west.