Zulkarnain Idros said is not fair to families who have to suffer from the consequence of serious crimes. 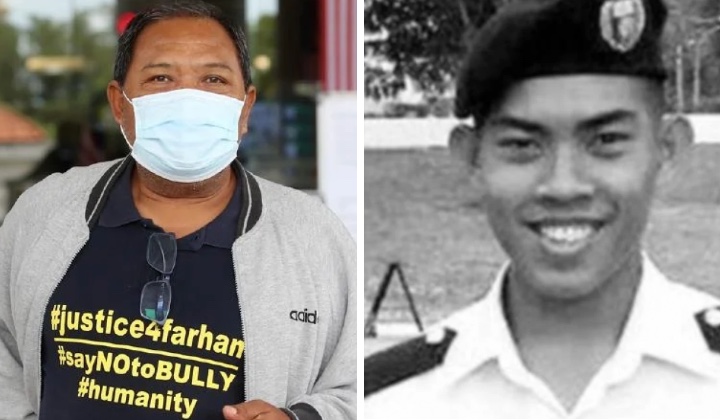 The father of Universiti Pertahanan Nasional Malaysia (UPNM) Marine Cadet Officer, the late Zulfarhan Osman Zulkarnain, disagreed with the government’s move to abolish the mandatory death penalty in the country.

Zulkarnain Idros, 57, was quoted by Berita Harian as saying the move was unfair to the families of the murder victims who had to suffer.

He feared that it would increase cases of serious offences, especially drug trafficking and murder.

He said life imprisonment was not an appropriate punishment to give awareness to the public to take heed and not commit serious crimes.

Zulkarnain also feared that the move will cause drug trafficking and murder cases to increase in the country.

Look at the cases related to the Dangerous Drugs Act 1952; before this, the mandatory death penalty was enforced, but drug trafficking cases are still high. Imagine later when the death penalty is abolished.

Zulkarnain Idros on why the mandatory death punishment must stay.

He added that for criminal offences involving murder according to Section 302 of the Penal Code, life imprisonment is not sufficient for those found guilty of murder.

The late Zulfarhan died at Serdang Hospital on 1 June 2017 due to abuse by a group of students at the public institution of higher learning.

Zulfarhan’s death uncovered and dragged 18 of his own classmates who tortured the victim to death.

Zulfarhan’s father prostrated while dripping tears outside the court after a judge ruled 18 suspects had to defend themselves on murder convictions.

A High Court judge ruled that 18 accused were found guilty on charges of murder, abetting murder and injuring Zulfarhan.

The judge sentenced six key suspects to 18 years in prison.

All 18 accused except Mohamad Shobirin were also sentenced to three years in prison after being found guilty of causing injury to Zulfarhan.

The tragic incident of Zulfarhan is an incident that served as a lesson for Malaysians to stop the culture of bullying in educational institutions.

"Don't be a bully, it can be life threatening, the effect on parents, like I have lost the eldest child who is the hope of the family…."

That's the father's reaction of Zulfarhan Zulkarnain Idros after hearing the verdict of his son's murder case at the Kl Court https://t.co/2wLuUJSyk2

Last Friday, the government agreed to abolish the mandatory death penalty in the country, with substitute sentences subject to the court’s discretion.

A further study will be carried out in collaboration with the Attorney General’s Chambers (AGC) Legal Affairs Division, the Prime Minister’s Department and other interested ministries and departments.

The decision was reached following a presentation of the report on the Study of Substitute Sentences on Mandatory Death Penalty.

The report was presented by the Minister in the Prime Minister’s Department (Parliament and Law), Datuk Seri Dr Wan Junaidi Tuanku Jaafar, at the Cabinet Meeting.

Hoping for the best from #Malaysia's pledge to end the mandatory death penalty, but we at @hrw are approaching this promise warily since we have heard this before from previous governments, and nothing happened. https://t.co/zJOF7zqHGn

In the meantime, Zulkarnain suggested that the government hold a referendum if a significant policy, especially the abolition of the mandatory death penalty, wants to be done.

It involves the lives of the people of this country, and I think it should be determined by the majority of the people, not just a group of parties who may have other interests.

Zulkarnain Idros on better representation in the decision to do away with mandatory death penalty.

11YO Johor Girl Found Dead With Wounds On Forehead And Neck