The NRD appears to be taking its own sweet time to process the application despite court orders. 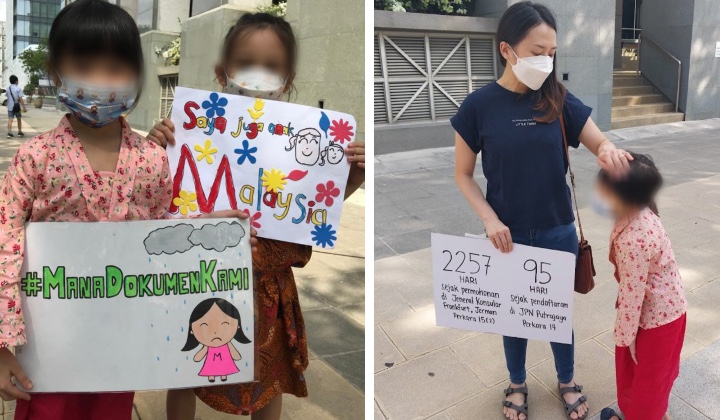 As a parents, nothing can be more frustrating than to see their children living on borrrowed time with no identity.

A mother has been waiting for 2,257 days from the day she applied for citizenship for her daughter.

Twitter user @EstherJohor said that was how long since she made the application at consulate general of Malaysia in Frankfurt, Germany.

After countless of trips to @jpnhqofficial, we are both very tired and disappointed. 2 weeks ago, I was told by them, my documents were accepted due to the court order but they not gonna process it yet. When they gonna process it? ‘Itulah mengikut pentadbiran kami’ pic.twitter.com/RTliD0JbCK

But since then, her daughter has yet to be granted citizenship by the National Registration Department (NRD).

The university lecturer followed up on the matter with visits to the NRD office, but to no avail despite obtaining court orders.

Malaysia is among some two dozen countries including Nepal, Iran, and Saudi Arabia that prevent women from passing their nationality to their children on an equal basis with men.

I take a deep dive into the turmoil Malaysian mothers have been put through.https://t.co/0L9kV11fzy

@EstherJohor said the NRD acknowledged receiving the application as per court order, but did not say when they will act on it.

She added that it has been 95 days since she submitted the relevant forms to the NRD at its headquarters.

Tired and disappointed of being given the run around, she wondered how long more does she still need to wait, or will she ever get it.

Mothers might be able to tolerate discrimination against ourselves but we can’t tolerate our children being discriminated. We want them to have their equal rights in their Mother-land.

@EstherJohor‘s plight had drawn the attention of netizens who expressed schock and disgust at the way she had been treated.

What do u call it when civil servants refuse 2 obey court orders? “they told me they wd accept my documents due 2 the court order, but that they were not going 2 process it,” Msian mums kept waiting 4 kids’ citizenship by JPN | Free Malaysia Today (FMT) https://t.co/TPQqoP0PLU

Some pointed out that non Malaysians had no trouble to obtain citizenships here.

As such, it does not make sense to them that a child born to a Malaysian mother is denied citizenship.

Meanwhile, i have a pakistan friend. Migrated to Malaysia some 25 years ago…. ic biru.
Howcome a girl born in Malaysia to a Malaysian Mother tak dapat IC biru? Apa rasional undang2 mcm tu?
Even De Paula and Sumareh got ic biru..

At the same time, netizens have started an online petition to help her and other Malaysian mothers facing the same injustice.

Causing More Problems Than It Has Solved

Netizens lamented how the civil service, though not all, is becoming an unresponsive government unto itself within the government.

They said civil servants are too focused on meeting key performance indicators (KPIs) or short-term goals rather than long-term visions.

Today I learned about the term "little Napoleon" from my supervisor. Not surprised that little Napoleons are so prominent in Malaysia, because I know they are from experience, but I was surprised to see that the term is frequently used in Malaysia. https://t.co/bjT99u26eg pic.twitter.com/zMT68KHLwc

Countless events and meetings are held to impress and please superiors, while specific, concrete objectives – that offers solutions and new approaches to problems and issues – are thrown out the window.

Although there is a Public Complaints Bureau (PCB) for the public to seek recourse, there is no specific body like an Administrative Appeals Tribunal or Ombudsman.

At the same time, the civil service continue to exert a heavy burden on taxpayers.

Despite claims of low pay by some, almost 45 percent of Malaysia’s national budget is spent on paying wages and pensions to past and present civil servants.

Sidek said he believed that Najib did so because of the former’s "low" civil servant’s salary, and not due to his position as chief secretary to the government at the time.#1MDB #Court #Najib #Sidek #Malaysia #News pic.twitter.com/2xtSiuVlxV