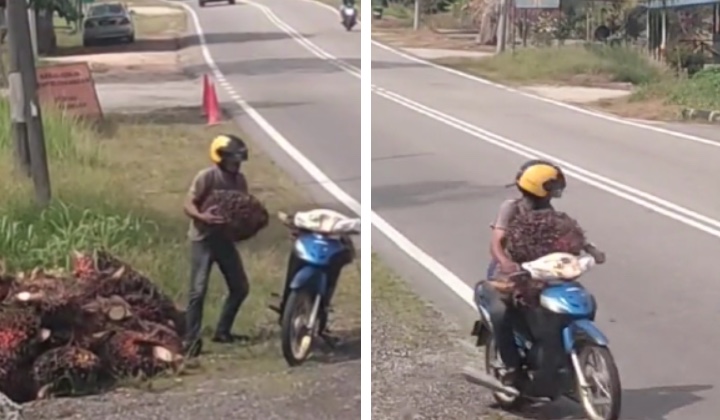 The prices of palm oil fresh fruit bunches (FFB) have been at an all-time high.

With the increase in oil palm fresh fruit prices, the commodity is increasingly becoming a target for thieves.

The theft was caught on video and went viral after it was shared on social media.

The palm oil fruits were put by the roadside, awaiting transportation when the man came on a motorcycle.

He did not appear to hesitate as he took the palm oil fruits and put in on his motorbike.

Netizens reacted to the theft with both condemnation and compassion.

Some said he could be doing it out of desperation to feed his family.

Others said he is robbing the hard work of others who laboured to harvest the oil palms.

At the same time, they speculated on what he would due with the palm oil fruits as they needed to be processed.

It is likely that the stolen palm oil fruits would be sold to unscrupulous dealers.

In the past, there had also been incidents of palm oil fruits, and some incidents resulted in deaths.

In fact, the Malaysian Palm Oil Board (MPOB) had even developed ways to prevent the theft of oil palm fresh fruit bunch (FFB).